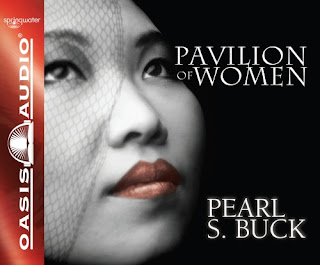 In a nutshell:
Madame Wu, mistress of an old and respected Chinese family, decides to implement major changes in her household as she reaches the milestone of her fortieth birthday, beginning with the addition of a second wife for her husband as she 'retires' from her physical duties.

My thoughts:
Heralding the beginning of a new phase of life, a woman's fortieth birthday held special significance in the great families of pre-communist China. The novel opens as Madame Wu prepares for her celebration.


"The first part of her life was over and the second part was about to begin.  She did not fear age, for age had its honors for her. She would with each year gain in dignity and in the respect of her family and her friends.  Nor was she afraid of losing her beauty, for she had allowed it to change with the years so subtly that it was still more apparent than her years.  She no longer wore the flowering colors of her youth, but the delicacy of her face and skin were as clear now as ever against the soft silver blues and gray greens of her costumes.  The whole effect of age upon her was one of refining and exalting rather than loss."  page 6

After careful deliberation, she enters into the second phase of life by selecting a second wife for her husband.


"Why had Heaven not made women twice as long-lived as men, so that their beauty and fertility might last as long as man lived and fade only with the generation? Why should a man's need to plant his seed continue too long for fulfillment in one woman?" page 34

In addition to wielding much power within the family, Madame Wu is also a highly intelligent woman, an attribute both praised and lamented by her late father-in-law.


"Your mind is an excellent one for a woman... I would even say, my daughter, that had your brains been inside the skull of a man, you would have sat for the Imperial Examinations and passed them with honor and thereby become an official in the land. But your brain is not in a man's skull.  It is in a woman's skull.  A woman's blood infuses it, a woman's heart beats through it, and it is circumscribed by what must be a woman's life.  In a woman it is not well for the brain to grow beyond the body." page 60

When a foreign priest, Brother Andre, is employed to teach her son English, Madame Wu has initial misgivings and insists language be the only thing taught. However, she soon finds herself drawn to both the man and his ideas.

With all that said, I suppose Pavilion of Women could be viewed as the ultimate midlife crisis in an exotic setting, but in reality, it is so much more.  Buck's familiarity with the country is evident, and her keen insight into Chinese culture, customs, and family dynamics shines through.

A note on the audio production:
The reader, Adam Verner, did an excellent job capturing the elegance, grace, and calm of Madame Wu, and the entire Wu household.  The narration was perfectly suited to the text, but I initially had trouble adjusting to the slow pace.  Still, it took less than one disc before I was entranced.

note: There were many profound passages I wanted to reread and share, so I borrowed an ancient copy of the book from my library.

Bottom line:
I loved Pavilion of Women and plan to read much more by Pearl Buck, beginning with a reread of The Good Earth. Highly recommended.
Posted by JoAnn at 1:54 PM