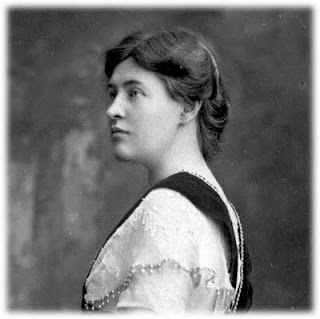 ... in 1873, American novelist Willa Cather was born in Back Creek, Virginia. Today's Writer's Almanac featured an interesting piece on her life.

It's the birthday of novelist Willa Cather, (books by this author) born Wilella Cather in the village of Back Creek near Winchester, Virginia (1873). The Cathers had a hired girl named Margie, and when Margie would go home to visit her mother, Mary Ann, she would bring young Willa with her. Mary Ann was illiterate, a "hill woman" from Timber Ridge, a stretch of the Appalachians. Willa soaked in the stories that Mary Ann told — the gossip, family feuds, stories of lovers and murderers and legacies from the Civil War. Many years later, Willa Cather said that this was the beginning of her life in storytelling.

Cather's family had a tense relationship with many of their neighbors. Willa Cather was the fifth generation of Virginian aristocracy. They lived in a large, elegant farmhouse. Even worse, her father's family were known supporters of the Union during the war — her father and uncle had crossed the border into West Virginia to avoid being drafted, and people suspected her grandfather of being a Union spy. The year that Willa was born, her uncle moved to Nebraska to homestead, and her grandparents soon followed their son. Willa's parents wanted to stay in Virginia and keep farming sheep. However, a few years later their four-story sheep barn burned to the ground, and there were rumors that it was an act of arson by resentful neighbors. The Cathers took that as a sign and headed off to join the rest of their family in Nebraska.

So in 1883, Willa, her three brothers and sisters, her parents, Willa's grandma on her mother's side, two of her cousins, their hired girl Margie, and Margie's brother all set off together for Nebraska. They took a train to Red Cloud, then a covered wagon out to the precinct of Catherton, which her relatives had named after themselves. She wrote later, "That shaggy grass country had ripped me with a passion I have never been able to shake. It has been the happiness and the curse of my life."

After a childhood on the prairie, growing up with immigrant pioneers, Cather went off to college at the University of Nebraska in Lincoln, intending to become a doctor. But after one of her professors sent in an essay of hers without her knowledge and it was published, she decided to become a writer instead.

She had a stint working for the Nebraska State Journal, then moved to Pittsburgh and ended up with a job at the Daily Leader. Crawford Peffer was a law student and friends with Edwin Couse, the editor of the Daily Leader. Peffer wrote: "I often went to his office at the close of the day's work, about 4 p.m. One day I found a young lady with flashing blue eyes, sitting opposite him at his large flattop desk, whom he introduced to me as 'Miss Cather, my new assistant.' […] Miss Cather was unconventional in both dress and conversation. She wore skirts much too short for that day and mannish looking shirtwaists. Soon we were calling her 'Bill,' a name she seemed to like. Bill Cather was the most argumentative person I have ever met. She disputed any subject that Couse or I brought up." That was in 1898. In 1906, she moved to New York to work on the editorial staff of McClure's. But the prairie remained her inspiration. She serialized her first novel, Alexander's Bridge, in McClure's in 1912. Her second novel, O Pioneers! (1913), was her first book about Nebraska — it was published when she was almost 40 years old. She wrote to a friend, "I wanted to let the country be the hero."

O Pioneers! begins: "One January day, thirty years ago, the little town of Hanover, anchored on a windy Nebraska tableland, was trying not to be blown away. A mist of fine snowflakes was curling and eddying about the cluster of low drab buildings huddled on the gray prairie, under a gray sky. The dwelling-houses were set about haphazard on the tough prairie sod; some of them looked as if they had been moved in overnight, and others as if they were straying off by themselves, headed straight for the open plain. None of them had any appearance of permanence, and the howling wind blew under them as well as over them.”

Over the past several years, I've enjoyed two of Cather's novels and a few of her short stories. Three years ago, my book club chose My Antonia as our annual classic selection. It received a unanimous thumbs up. The following year, I read O Pioneers! and loved it. Since then, I've purchased a few more of her novels and consider myself a fan.

The TBR Dare, sponsored by James at Ready When You Are, C.B. begins January 1 and offers me the perfect opportunity to return to Cather's work. I will choose from:

Death Comes For the Archbishop
A Lost Lady
The Professor's House

Have you read Willa Cather? Can you help me decide which book to read next?
Posted by JoAnn at 2:04 PM