A month of Christmas Short Story Mondays was planned for December, but my copy of The Virago Book of Christmas has yet to arrive from The Book Depository. Over the weekend, I reread Truman Capote's "A Christmas Memory". It's my favorite Christmas story, and this post is a rerun from last December.

After a couple of decidedly untraditional stories, Truman Capote's "A Christmas Memory", set in the depression-era rural south, had me sighing with relief at the end of the first paragraph.


"Imagine a morning in late November. A coming of winter morning more than twenty years ago. Consider the kitchen of a spreading old house in a country town. A great black stove is its main feature; but there is also a big round table and a fireplace with two rocking chairs placed in front of it. Just today the fireplace commenced its seasonal roar."

This house is home to several members of a family, including an old woman and a young boy (our narrator) she calls Buddy. The two friends obviously have a very special bond.

"It's always the same: a morning arrives in November, and my friend, as though officially inaugurating the Christmas time of year that exhilarates her imagination and fuels the blaze of her heart, announces: 'It's fruitcake weather! Fetch our buggy. Help me find my hat.' "

The boy's memories of the season follow. On the first day of "fruitcake weather", the two gather 'windfall pecans'. The second day finds them buying the rest of the necessary ingredients, with money that has been carefully saved all year. On the third day, the baking commences. 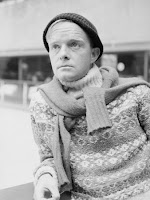 The fruitcakes (as many as 31) are given to people that matter to the old woman and boy. Some are people the two barely know - like the bus driver that waves as he passes by every other day. One is even sent to President Roosevelt at the White House, and the old woman imagines him enjoying it on Christmas morning.
The boy shares the adventure of cutting down the Christmas tree:

" 'It should be, muses my friend, 'twice as tall as a boy. So a boy can't steal the star.' The one we pick is twice as tall as me. A brave handsome brute that survives thirty hatchet strokes before it keels with a creaking rending cry. Lugging it like a kill, we commence the long trek out. Every few yards we abandon the struggle, sit down and pant. But we have the strength of triumphant huntsmen; that and the tree's virile, icy perfume revive us, goad us on."

The making and giving of homespun gifts is also described. The entire story is beautifully written and a joy to read.
Truman Capote wrote this autobiographical story in 1956. It was first published in Madamoiselle and, later, as a book. It was also made into a movie in 1997 starring Patty Duke and Piper Laurie.
An internet search turned up this You Tube video that has Capote reading the story himself. Enjoy! 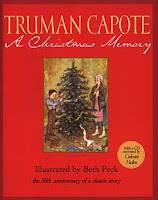