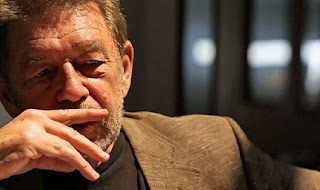 (AP photo/Bebeto Matthews)
When Pete Hamill's name appeared on the speaker list for the Rosamond Gifford Lecture Series, it wasn't immediately familiar. After a quick search, I remembered hearing about Snow in August, but didn't know much about his career in journalism. A few months later, two of his books were on my 2009 list of favorites, his lecture was fantastic, and I am officially a fan!
After years of thinking, my book club finally took the plunge and eight of us purchased season tickets for the Gifford series. The group had been struggling with selections, and the lectures provided built-in reading material while infusing much-needed enthusiasm. Since previous authors focused on their most recent books, we chose North River for our December meeting.

After just a few pages, I loved it! Set in New York City during the Depression, it features mobsters and political corruption, but mostly revolves around Dr. James Delaney, a GP wounded in WWI and deserted by his both his wife and daughter, who one day finds his two year old grandson, dropped at his doorstep. Delaney, still struggling with war wounds and abandonment, hires Rose, a Sicilian illegal immigrant, as housekeeper and surrogate mother to Carlito, and a make-shift family is formed.
"Hamill has crafted a beautiful novel, rich in New York City detail and ambiance, that showcases the power of human goodness and how love, in its many forms, can prevail in an unfair world." (from Publisher's Weekly)
North River has it all - beautiful writing, wonderful characters, and a setting rich in detail. Check out the few sentences I highlighted in this Teaser Tuesdays post.

After finishing North River, I wanted to read another of Hamill's books immediately. My choice was an audio version of the nonfiction Downtown: My Manhattan, read by the author.
Hamill is an excellent reader, and Downtown: My Manhattan ended up being my favorite nonfiction book of the year. It's a fascinating look at the history of Manhattan with bits of Hamill's life woven in. It covers everything from baseball to vaudeville, and architecture to politics. Hamill's love of the city is obvious throughout. While listening to him describe Trinity Church and its surroundings, I was wishing he would record narrated walking tours of Manhattan!
Finally, it was the evening of the lecture. As luck would have it, the weather was simply miserable and half the group didn't make it, but those that did were enthralled for 90 minutes. Hamill talked more about his life and experiences than the books he's written. He talked of his love for libraries ("temples of wisdom") and books, and the power of words. At 75, he's rereading many of his favorite books, and finds them even richer with the perspective gained from a "life lived".
As Hamill talked about print journalism, I was amazed to learn that 70% of the cost of a newspaper is in the delivery - the paper and ink, trucks and gas. He believes in the future of journalism, but sees a new model of delivery evolving.
We loved hearing about Hamill's childhood. We were taken with his humor, as well as his humility, and decided he'd be an asset to any dinner party! Since it's doubtful I'll ever find myself on the same guest list, reading more of his books will have to do.
The lecture series takes a short hiatus during the winter months (what writer would come to Syracuse in February?) and resumes in March with Richard Russo.
Posted by JoAnn at 8:20 AM