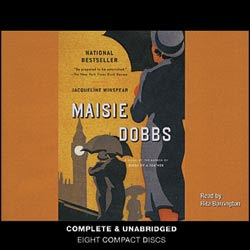 Maisie Dobbs
by Jacqueline Winspear
Narrated by Rita Barrington
BBC Audiobooks America, 2008
(originally published 2003)
10 hours
Publishers summary:
The debut of one of literature's favorite sleuths! Maisie Dobbs isn't just any young housemaid. Through her own natural intelligence - and the patronage of her benevolent employers - she works her way into college at Cambridge. After the War I and her service as a nurse, Maisie hangs out her shingle back at home: M. DOBBS, TRADE AND PERSONAL INVESTIGATIONS.
But her very first assignment, seemingly an ordinary infidelity case, soon reveals a much deeper, darker web of secrets, which will force Maisie to revisit the horrors of the Great War and the love she left behind.
My thoughts:
Maisie Dobbs has quite a following among book bloggers. After listening to the first of these literary mysteries, I certainly understand why.
It's very well written, features a smart female character, a wonderful historic setting, and just the right amount of suspense. We learn of Masie's experiences growing up, as a nurse in WWI , and how she came to be an investigator. In addition to cracking her first case, the book lays the foundation for the series by providing valuable insight into Maisie's character. Much of it will, no doubt, be built upon in future books.
The audio version of Maisie Dobbs is very well done. The reader's wonderful British accent enhanced my perception of Maisie's intelligence and manners. I was also impressed when her voice took on a detached, almost dream-like, quality as wartime events were recalled.
I will definitely continue with Birds of a Feather, the second title in the series. The only decision to make is whether to read or to listen!
Posted by JoAnn at 4:30 PM