Fire In The Blood by Irene Nemirovsky 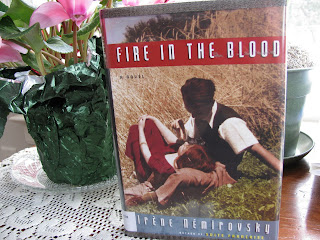 Fire In The Blood
by Irene Nemirvosky
(translated from French)
2007/Alfred A. Knopf
138 pages

Suite Francaise by Irene Nemirovsky was one of my favorite books read in 2007, so I was delighted to learn from Margaret at BooksPlease of another newly discovered novel by the same author. Fire In The Blood was published in 2007 after two parts of the manuscript were found separately and pieced together.

Irene Nemirovsky was born in Kiev in 1903. She emigrated with her family to France during the Russian Revolution, attended the Sorbonne, and wrote several successful novels. Despite a conversion to Catholicism in 1939, she was arrested in 1942 and sent to Auschwitz where she died a month later.

Fire In The Blood centers around the narrator Silvio, an old farmer who has returned to the village of his youth in hopes of living a quiet life of solitude.

"For sometimes I feel I have been rejected by life, as if washed ashore by the
tide. I've ended up on a lonely beach, an old boat, still solid and seaworthy,
but whose paint has faded in the water, eaten away by salt." (page 6)

Instead, he again becomes caught up in village life and its scandals. He tries to help Colette, the daughter of his cousin Helene, when her husband "falls" into a mill stream and drowns.

"Such madness! When you're twenty, love is like a fever, it makes you delirious.
When it's over you can hardly remember how it happened...Fire in the blood, how
quickly it burns itself out. Faced with this blaze of dreams and desires, I felt
so old, so cold, so wise..." (page 37)

This scandal causes Silvio to reflect on the secrets of his own youth:

"The flesh is easy to satisfy. It's the heart that is insatiable, the heart that
needs to love, to despair, to burn with any kind of fire...that was what we
wanted. To burn, to be consumed, to devour our days just as fire devours the
forest." (page 127)

Beautifully, yet simply written, this book slowly reveals Silvio's past full of long-buried secrets.
My rating 4/5.

This book, borrowed from the library, will fulfill challenge #6 of the 2009 mini-challenges.
Posted by JoAnn at 1:15 PM