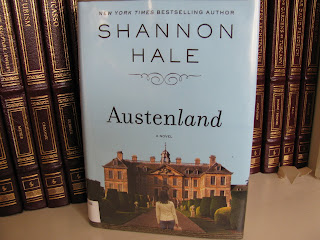 Pure fun! After reading Bookfoolery and Babble's review last week, I knew this was a book I had to read -right now! From the opening sentence, to the very last page, Austenland by Shannon Hale was an absolute delight.

Publisher's blurb:
Jane Hayes is a seemingly normal New Yorker, but she has a secret. Her obsession with Mr. Darcy, as played by Colin Firth in the BBC adaption of Pride and Prejudice, is ruining her life. No real man can compare.

When a wealthy relative bequeaths her a trip to an English resort catering to Austen-crazed women, Jane's fantasies of meeting the perfect Regency-era gentleman suddenly become realer than she ever could have imagined. Decked out in empire-waist gowns, stripped of her modern appliances, Jane throws herself into mastering Regency etiquette and flirts with gardeners and gentlemen - or maybe even, she suspects, with the actors who are playing them.

It's all a game, Jane knows. And yet, the longer she stays, the more her insecurities seem to vanish. Is she about to kick the Austen obsession for good, or could all her dreams actually culminate in a Mr. Darcy of her own?

Starting with the dedication page:

For Colin Firth,
You're a really great guy, but I'm married,
so I think we should just be friends.

and continuing on to the prologue:

It is a truth universally acknowledged that a thirty-something woman in
possession of a satisfying career and fabulous hairdo must be in want of very
little, and Jane Hayes, pretty enough and clever enough, was certainly thought
to have little to distress her.

How can you help but smile? There was one on my face for the entire 196 pages! I could gush about this book all day, but instead, I'll just say that if you're a fan of Jane Austen, or Pride and Prejudice, you ABSOLUTELY MUST read this book. My only regret was that the book was not my own. After turning the last page, it had to go back to the library.

Almost instantly, an idea popped into my head. I could buy the book for my college-freshman daughter for Valentine's Day! She's a JA enthusiast (like Mom) and is even taking a Jane Austen in Film class this semester. In the bookstore, I was looking for the sky blue cover, but instead found the paperback edition with something quite different. 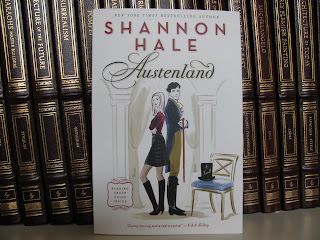 I was initially disappointed, but it is growing on me. My daughter will probably prefer this one, but perhaps that is part of the marketing strategy...and the basis for another post. I'd be interested in hearing which you prefer. Regardless of the cover, as far as Jane Austen based fiction goes, it just doesn't get any better than this!
Posted by JoAnn at 7:22 PM