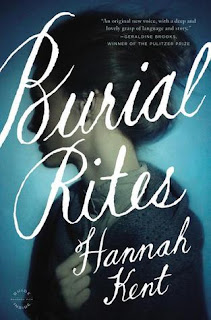 
This book has been languishing on my kindle for quite some time. Thanks to an audible daily deal, I recently snapped up the audio version (skillfully narrated by  Morven Christie) and began a read/listen combination.

Burial Rites  is based on the true story of Agnes Magnúsdóttir, the last person to be executed in Iceland. She was convicted of the brutal 1828 murder of her former master, then sent to live on a remote farm while awaiting execution. As she forms a relationship with the family and a young minister, her story is gradually revealed.

Iceland itself is central to the story - the landscape, weather, light and darkness, and even its smells. Burial Rites  is a novel for the senses, and the audiobook adds to the overall experience. I loved the author's portrayal of the country and her characterization of Agnes. The gradual reveal of Agnes' story kept me reading... surprisingly skillful for a debut novelist. I have added Kent's second novel, The Good People, to my wish list.