Book Brief: A Spool of Blue Thread by Anne Tyler 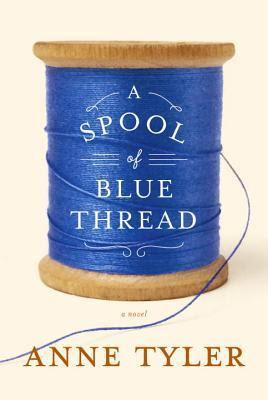 Motivation for reading: A book blogger's recent review prompted me to click over to my library's website and discover both the ebook and audiobook were available. Sure wish I could remember whose review it was. Might it have been yours?

Source: ebook and digital audio borrowed from the library

Publisher's summary:
"It was a beautiful, breezy, yellow-and-green afternoon." This is how Abby Whitshank always begins the story of how she fell in love with Red that day in July 1959. The Whitshanks are one of those families that radiate togetherness: an indefinable, enviable kind of specialness. But they are also like all families, in that the stories they tell themselves reveal only part of the picture. Abby and Red and their four grown children have accumulated not only tender moments, laughter, and celebrations, but also jealousies, disappointments, and carefully guarded secrets. from Red's father and mother, newly-arrived in Baltimore in the 1920s, to Abby and Red's grandchildren carrying the family legacy boisterously into the twenty-first century, here are four generations of Whitshanks, their lives unfolding in and around the sprawling, lovingly worn Baltimore house that has always been their anchor.

Brimming with all the insight, humour, and generosity of spirit that are the hallmarks of Anne Tyler's work, A Spool of Blue Thread  tells a poignant yet unsentimental story in praise of family in all its emotional complexity. It is a novel to cherish.

PART ONE
Can't Leave Till the Dog Dies

1
Late one July evening in 1994, Red and Abby Whitshank had a phone call from their son Denny. They were getting ready for bed at the time. Abby was standing at the bureau in her slip, drawing hairpins one by one from her scattery sand-colored topknot. Red, a dark, gaunt man in striped pajama bottoms and a white T-shirt, had just sat down on the edge of the bed to take his socks off; so when the phone rang on the nightstand beside him, he was the one who answered. "Whitshank residence," he said.

I've been reading Anne Tyler for decades... starting back in the 1980s with An Accidental Tourist, Dinner at the Homesick Restaurant, and Saint Maybe. In the mid 90s, our playgroup morphed into a book club (the kids started school, but the moms wanted to keep meeting) and Ladder of Years  was our first selection.

Several years later, I discovered audiobooks. Tyler became my first "audio author" as I listened to The Amateur Marriage, Back When We Were Grownups, and, my favorite, Digging to America.

After joining the book blogging community in 2008, I started reading more classics and nonfiction, and somehow never got around to Anne Tyler's next new novel. Or the one after that, and maybe even another. I really meant to read A Spool of Blue Thread  when it was released in 2015, especially after it was nominated for several awards. Now here we are, midway through 2018, and Tyler has written two more  novels.

So I finally picked up A Spool of Blue Thread  and found myself back in familiar Tyler territory... Baltimore. I found familiar themes and wonderfully complex relationships.
I still love Tyler's description of families, her character development, and they way she delves deep into relationship dynamics. Why did I wait so long?

A note on the audio production: Kimberly Farr's narration was, as always, excellent. Her pacing and tone were just right, and I especially appreciated how she conveyed Nora's (annoyingly) calm, placid demeanor. I was happy to learn she narrated Clock Dance, too.