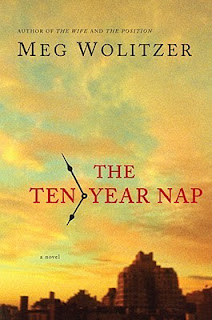 Source: hardcover and digital audio borrowed from the library

Publisher's summary:
For a group of four New York friends, the past decade has been largely defined by marriage and motherhood. Educated and reared to believe that they would conquer the world, they then left jobs as corporate lawyers, investment bankers, and film scouts to stay home with their babies. What was meant to be a temporary leave of absence has lasted a decade. Now, at age forty, with the halcyon days of young motherhood behind them and without professions to define them, Amy, Jill, Roberta, and Karen face a life that is not what they were brought up to expect but seems to be the one they have chosen.

But when Amy gets to know a charismatic and successful working mother of three who appears to have fulfilled the classic women's dream of having it all-work, love, family-without having to give anything up, a lifetime's worth of concerns, both practical and existential, opens up. As Amy's obsession with this woman's bustling life grows, it forces the four friends to confront the choices they've made in opting out of their careers-until a series of startling events shatters the peace and, for some of them, changes the landscape entirely.


All around the country, the women were waking up. Their alarm clocks bleated one by one, making soothing or grating sounds or the stirrings of a favorite song. There were hums and beeps and a random burst of radio. There were wind chimes and roaring surf, and the electronic approximation of birdsong and other gentle animal noises. All of it accompanied the passage of time, sliding forward in liquid crystal. Almost everything in these women's homes required a plug. Voltage stuttered through the curls of wire, and if you put your ear to one of these complicated clocks in any of the bedrooms, you could hear the burble of industry deep inside its cavity. Something was quietly happening.

I'm beginning to think Meg Wolitzer can do no wrong.

The Ten-Year Nap takes an intimate look at the lives of  four Manhattan friends. While they're taking a break to stay home with young children, some long for their old careers, while others dream of forging a new path. Relationship dynamics - with spouses, children, friends - as well as internal conflicts and struggles fill the pages of this novel.

Meg Wolitzer understands women's lives and she's able to infuse her novels with an authentic NYC vibe. Reading her books is enjoyable and rewarding... every time.

This was a read/listen combination for me. The audio production was fine, though unremarkable. There's nothing to especially recommend it, nor any reason to dissuade you from going that route.

I'll read The Wife  next, hopefully before the movie is released next month.