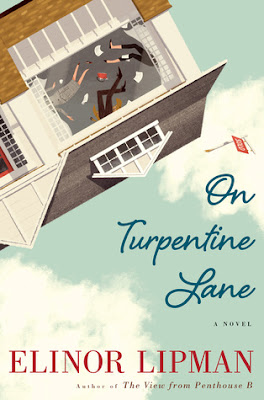 If I hadn't been naive and recklessly trusting, would I ever have purchased number 10 Turpentine Lane, a chronic headache, masquerading as a charming bungalow? "Best value in town," said the ad, which was true, if judging by the price tag alone. I paid almost nothing by today's standards, attributing the bargain to my mother's hunch that the previous owner had succumbed while in residence. Not so off-putting, I rationalized; don't most people die at home? On moving day my next-door neighbor brought me a welcome loaf of banana bread along with the truth about my seller. A suicide attempt . . . sleeping pills . . . she'd saved them up until she had enough, poor thing. And who could blame her? "Strong as an ox," she added. "But a whole bottle?" She tapped the side of her head.

"Her daughter had to make the awful decision long distance."


On Turpentine Lane
by Elinor Lipman

Elinor Lipman's books are just plain fun to read. Her latest novel, On Turpentine Lane, is delivering the quirky characters and snappy dialogue. I've come to expect. I grabbed it off my library's "new fiction" shelf and started reading right away. Here's the goodreads summary:


At thirty-two, Faith Frankel has returned to her claustro-suburban hometown, where she writes institutional thank-you notes for her alma mater. It's a peaceful life, really, and surely with her recent purchase of a sweet bungalow on Turpentine Lane her life is finally on track. Never mind that her fiancé is off on a crowdfunded cross-country walk, too busy to return her texts (but not too busy to post photos of himself with a different woman in every state.) And never mind her witless boss, or a mother who lives too close, or a philandering father who thinks he's Chagall. When she finds some mysterious artifacts in the attic of her new home, she wonders whether anything in her life is as it seems. What good fortune, then, that Faith has found a friend in affable, collegial Nick Franconi, officemate par excellence .

At the 50% mark, this novel has been the perfect complement to my decidedly more serious audiobook... 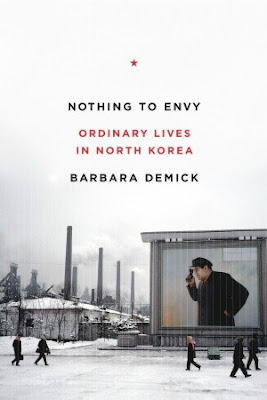 Nothing to Envy: Ordinary Lives in North Korea
by Barbara Demick, narrated by Karen White

This one has been in my audible library and on my kindle for quite some time, but seemed especially appropriate this week. Published in 2009, it's an eye-opening account of everyday life in North Korea. I'm hoping it's still current enough to provide insight as I continue to follow the news.


Nothing to Envy follows the lives of six North Koreans over fifteen years—a chaotic period that saw the death of Kim Il-sung, the unchallenged rise to power of his son Kim Jong-il, and the devastation of a far-ranging famine that killed one-fifth of the population.

Taking us into a landscape most of us have never before seen, award-winning journalist Barbara Demick brings to life what it means to be living under the most repressive totalitarian regime today—an Orwellian world that is by choice not connected to the Internet, in which radio and television dials are welded to the one government station, and where displays of affection are punished; a police state where informants are rewarded and where an offhand remark can send a person to the gulag for life.

Demick takes us deep inside the country, beyond the reach of government censors. Through meticulous and sensitive reporting, we see her six subjects—average North Korean citizens—fall in love, raise families, nurture ambitions, and struggle for survival. One by one, we experience the moments when they realize that their government has betrayed them.

Nothing to Envy is a groundbreaking addition to the literature of totalitarianism and an eye-opening look at a closed world that is of increasing global importance.

I've been listening on my morning walks and it's kept me going the entire hour, despite rising temperatures. I'm in Florida until early May.

What are you reading this week?