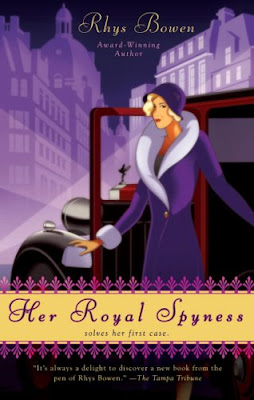 Publisher's summary:
Georgie, aka Lady Victoria Georgiana Charlotte Eugenie, cousin of King George V of England, is penniless and trying to survive on her own as an ordinary person in London in 1932.

So far she has managed to light a fire and boil an egg... She's gate-crashed a wedding... She's making money by secretly cleaning houses... And she's been asked to spy for Her Majesty the Queen.

Everything seems to be going swimmingly until she finds a body in her bathtub... and someone is definitely trying to kill her.

A lot of bloggers enjoy Rhys Bowen's novels and now I understand why. After a couple of nonfiction audiobooks, I was in the mood for something completely different - "Georgie" to the rescue! Bowen takes full advantage of her heroine's position (34th in line to the throne and flat broke) to create an endearing character while delivering some unexpectedly comical scenes.

Katherine Kellgren's British accent added to my enjoyment. Her pacing and delivery were pitch perfect. I will certainly continue listening to this series.

Overall, Her Royal Spyness reminded me of a light-hearted Maisie Dobbs.  In fact, I'll likely reach for the next book in this series before catching up with Maisie.