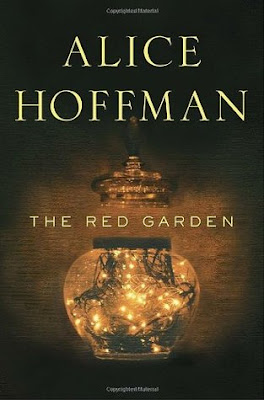 The town of Blackwell, Massachusetts, changed it name in 1786. It had been called Bearsville when it was founded in 1750, but it quickly became apparent that a name such as that did little to encourage new settlers. True, there were nearly as many black bears in the woods then as there were pine trees, but there were also more eel in the river than there were ferns sprouting on the banks. You could stick your hand into the murky green shallows and catch half a dozen of the creatures without using bait. If you ventured waist-high you'd be surrounded in moments. Yet none considered calling the village Eelsville, even though people ate eel pie on a regular basis and many of the men wore eelskin belts and boots. They said wearing eel made them lucky at cards, but when it came to the rest of life, love for instance, they had no luck at all.

The Red Garden
by Alice Hoffman

It's always tricky choosing the December book club selection. Everyone is so busy. That means nothing too long or too "hard", and, since it's the holiday season, nothing too depressing. We finally settled on The Red Garden  and are hoping it meets all the requirements.

The main attraction for me is the structure. A series of connected stories, moving forward over a period of 200 years, provides a history of one small town in the Berkshire mountains.


The Red Garden  introduces us to the luminous and haunting world of Blackwell, Massachusetts, capturing the unexpected turns in its history and in our own lives.
In exquisite prose, Hoffman offers a transforming glimpse of small-town America, presenting us with some three hundred years of passion, dark secrets, loyalty, and redemption in a web of tales where characters' lives are intertwined by fate and by their own actions.

From the town's founder, a brave young woman from England who has no fear of blizzards or bears, to the young man who runs away to New York City with only his dog for company, the characters in The Red Garden are extraordinary and vivid: a young wounded Civil War soldier who is saved by a passionate neighbor, a woman who meets a fiercely human historical character, a poet who falls in love with a blind man, a mysterious traveler who comes to town in the year when summer never arrives.

At the center of everyone's life is a mysterious garden where only red plants can grow, and where the truth can be found by those who dare to look.


What do you think? Would you keep reading?