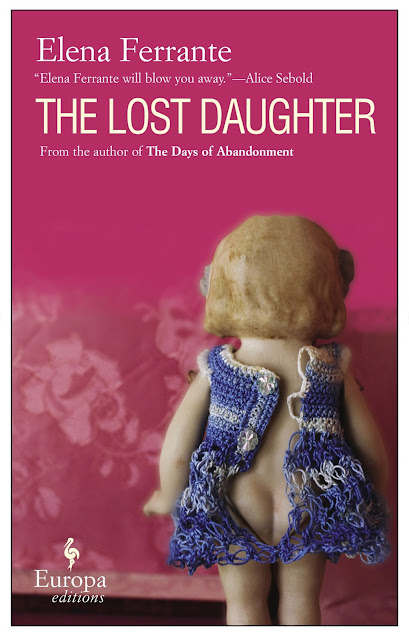 I had been driving for less than an hour when I began to feel ill. The burning in my side came back, but at first I decided not to give it any importance. I became worried only when I realized that I no longer had the strength to hold onto the steering wheel. In the space of a few minutes my head became heavy, the headlights grew dimmer; soon I even forgot that I was driving. I had the impression, rather, of being at the sea, in the middle of the day. The beach was empty, the water was calm, but on a pole a few meters from shore a red flag was waving.  When I was a child, my mother had frightened me, saying, Leda, you must never go swimming if you see a red flag: it means the sea is rough and you might drown. That fear had endured through the years, and even now, although the water was a sheet of translucent paper stretching to the horizon, I didn't dare go in: I was anxious. I said to myself, go on, swim: they must have forgotten the flag, and meanwhile I stayed on the shore, cautiously testing the water with the tip of my toe. Only at intervals my mother appeared at the top of the dunes and shouted to me as if I were still a child: Leda, what are you doing, don't you see the red flag?

In the hospital, when I opened my eyes, I saw myself again hesitating for a fraction of a second before the flat sea. Maybe that was why, later, I convinced myself that it wasn't a dream but a fantasy of alarm that lasted until I woke up in the hospital room. The doctors told me that my car had ended up against a guardrail but without critical consequences. The only serious injury was in my left side, an inexplicable lesion.

My friends from Florence came, Bianca and Marta returned, and even Gianni. I said it was drowsiness that had sent me off the road. But I knew very well that drowsiness wasn't to blame. At the origin was a gesture of mine that made no sense, and which, precisely because it was senseless, I immediately decided not to speak of to anyone. The hardest things to talk about are the ones we ourselves can't understand.

The Lost Daughter
by Elena Ferrante

Since the final installment of Elena Ferrante's Neopolitan Novels will not be available until September, I decided to dive into her backlist while I wait. This is the entire first chapter from her 2006 novel, The Lost Daughter.  I posted the whole thing because I thought the final sentences were quite powerful. Here is the goodreads summary:


The Lost Daughter is Elena Ferrante's most compelling and perceptive meditation on womanhood and motherhood yet. Leda, a middle-aged divorce, is alone for the first time in years when her daughters leave home to live with their father. Her initial, unexpected sense of liberty turns to ferocious introspection following a seemingly trivial occurrence. Ferrante's language is as finely tuned and intense as ever, and she treats her theme with a fierce, candid tenacity.

Every Tuesday, Diane at Bibliophile by the Sea posts the opening paragraph (sometime two) of a book she decided to read based on the opening. Feel free to grab the banner and play along.
Posted by JoAnn at 8:57 AM