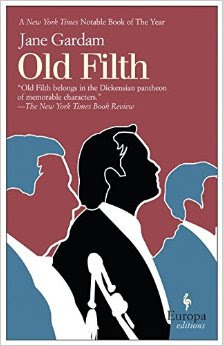 He was spectacularly clean. You might say ostentatiously clean. His ancient fingernails were rimmed with purest white. The few still-gold hairs below his knuckles looked always freshly shampooed, as did his curly still-bronze hair. His shoes shone like conkers. His clothes were always freshly pressed. He had the elegance of the 1920s, for his garments, whatever they looked like off, always became him. Always a Victorian silk handkerchief in the breast pocket. Always yellow cotton or silk socks from Harrod's; and some still perfect from his old days in the East. His skin was clear and, in poor light, young.

A couple of days ago I began reading Between You & Me: Confessions of a Comma Queen  by Mary Norris. It's a new hardcover from the library. As I've also developed a fondness for reading in the pool (on one of those comfy floating chairs), library books are an obvious contraindication.

I bought a paperback copy of Old Filth  at a library sale a year or two ago. In addition, I have an audio version, which I scored during a Buy One, Get One sale at audible.  I love that description of Old Filth {though I had to google conker - it's the seed of a horse chestnut} and look forward to getting to know him better. Think I'll get started later today.


Sir Edward Feathers has had a brilliant career, from his early days as a lawyer in Southeast Asia, where he earned the nickname Old Filth (FILTH being an acronym for Failed In London Try Hong Kong) to his final working days as a respected judge at the English bar. Yet through it all he has carried with him the wounds of a difficult and emotionally hollow childhood. Now an eighty-year-old widower living in comfortable seclusion in Dorset, Feathers is finally free from the regimen of work and the sentimental scaffolding that has sustained him throughout his life. He slips back into the past with ever mounting frequency and intensity, and on the tide of these vivid, lyrical musings, Feathers approaches a reckoning with his own history. Not all the old filth, it seems, can be cleaned away.