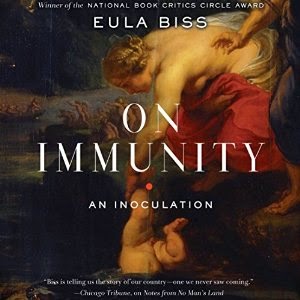 The first story I ever heard about immunity was told to me by my father, a doctor, when I was very young. It was the myth of Achilles, whose mother tried to make him immortal. She burned away his mortality with fire, in one telling of the story, and Achilles was left impervious to injury everywhere except his heal, where a poisoned arrow would eventually wound and kill him. In another telling, the infant Achilles was immersed in the River Styx, the river that divides the world from the underworld. His mother held her baby by the heel to dip him in the water, leaving, again, one fatal vulnerability.

On Immunity: An Innoculation
by Eula Biss
narrated by Tamara Marston

The subject of immunization is certainly timely and, as a pharmacist and a mother, I find it to be quite interesting, too. On Immunity  caught my attention during Nonfiction November and I grabbed the audio version a few weeks ago when it was an audible daily deal. I listened to the beginning yesterday and it sounds promising.


Upon becoming a new mother, Eula Biss addresses a chronic condition of fear - fear of the government, the medical establishment, and what is in your child's air, food, mattress, medicine, and vaccines. She finds that you cannot immunize your child, or yourself, from the world.

In this bold, fascinating book, Biss investigates the metaphors and myths surrounding our conception of immunity and its implications for the individual and the social body. As she hears more and more fears about vaccines, Biss researches what they mean for her own child, her immediate community, America, and the world, both historically and in the present moment. She extends a conversation with other mothers to meditations on Voltaire's Candide, Bram Stoker's Dracula, Rachel Carson's Silent Spring, Susan Sontag's AIDS and Its Metaphors, and beyond. On Immunity is a moving account of how we are all interconnected - our bodies and our fates.

What do you think? Would you read (or listen to) more?

Every Tuesday, Diane at Bibliophile by the Sea posts the opening paragraph (sometime two) of a book she decided to read based on the opening. Feel free to grab the banner and play along.
Posted by JoAnn at 2:30 PM