An Unnecessary Woman by Rabih Alameddine 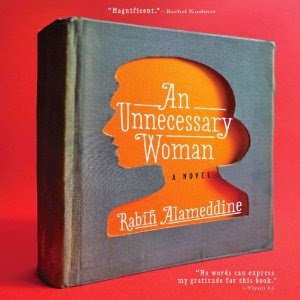 Publisher's Summary:
Aaliya Saleh lives alone in her Beirut apartment, surrounded by stockpiles of books. Godless, fatherless, childless, and divorced, Aaliya is her family's "unnecessary appendage." Every year, she translates a new favorite book into Arabic, then stows it away. The 37 books that Aaliya has translated over her lifetime have never been read by anyone.

In this breathtaking portrait of a reclusive woman's late-life crisis, listeners follow Aaliya's digressive mind as it ricochets across visions of past and present Beirut. Colorful musings on literature, philosophy, and art are invaded by memories of the Lebanese Civil War and Aaliya's own volatile past. As she tries to overcome her aging body and spontaneous emotional upwellings, Aaliya is faced with an unthinkable disaster that threatens to shatter the little life she has left.

A love letter to literature and its power to define who we are, the prodigiously gifted Rabih Alameddine has given us a nuanced rendering of one woman's life in the Middle East.

My thoughts:
An Unnecessary Woman took me to a place I've never been. Not even through literature have I visited Beirut (or the country of Lebanon, for that matter) and it was an eye-opening journey. Through Aaliya's slowly unfolding story, I learned of her reclusive life as an "unnecessary" woman, her inner struggles and intellectual musings, and the changes she observed in her beloved city from its Civil War to the present.

Aaliya's voice is authentic and believable, and I was well into the book before I realized Rabih Alameddine is a man. Very impressive.

Finally, I would have missed this book had it not been for a tweet directing my attention to an article highlighting indie book seller recommendations of overlooked gems. So maybe twitter isn't a total waste of time...

A note on the audio production:
Suzanne Torren was named an Audie Award finalist in the Literary Fiction category for her narration of An Unnecessary Woman. Her list of audiobook credits is long and impressive. This may be one of her best efforts.

Read or listen?
A tough call... An Unnecessary Woman  is a smart, literary novel and the audio production is outstanding. As I made my way through the book, I often had the urge to stop, reread a passage, and think for a moment. Listening made that difficult, so print may be the way to go with this book.