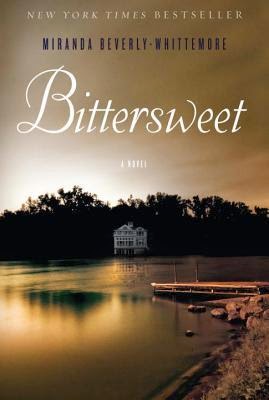 CHAPTER ONE
The Roommate

Before she loathed me, before she loved me, Genevra Katherine Winslow didn't know that I existed. That's hyperbolic, of course; by February, student housing had required us to share a hot shoe box of a room for nearly six months, so she must have gathered I was a physical reality (if only because I coughed every time she smoked her Kools atop the bunk bed), but until the day Ev asked me to accompany her to Winloch, I was accustomed to her regarding me as she would a hideously upholstered armchair - something in her way, to be utilized when absolutely necessary, but certainly not what she'd have chosen herself.

Bittersweet: A Novel
by Miranda Beverly-Whittemore

"Suspenseful and cinematic, Bittersweet  exposes the gothic underbelly of an idyllic world of privilege and an outsider’s hunger to belong."  Of course this novel landed on my wish list before it was released last spring, and I snapped it up as a kindle daily deal in August... and then forgot about it. I was considering what to read on my upcoming trip to Florida when it appeared on Sarah's recent Top Ten Tuesday post, Books About Wealthy People Behaving Badly. Since we're leaving later today, I picked it up last night. I loved the opening paragraph, as well as the rest of the first chapter, and have a good feeling about this book.

Want to know more? Here is the goodreads summary:


On scholarship at a prestigious East Coast college, ordinary Mabel Dagmar is surprised to befriend her roommate, the beautiful, wild, blue-blooded Genevra Winslow. Ev invites Mabel to spend the summer at Bittersweet, her cottage on the Vermont estate where her family has been holding court for more than a century; it’s the kind of place where children twirl sparklers across the lawn during cocktail hour. Mabel falls in love with midnight skinny-dipping, the wet dog smell that lingers near the yachts, and the moneyed laughter that carries across the still lake while fireworks burst overhead. Before she knows it, she has everything she’s ever wanted: friendship, a boyfriend, access to wealth, and, most of all, for the first time in her life, the sense that she belongs.

But as Mabel becomes an insider, a terrible discovery leads to shocking violence and reveals what the Winslows may have done to keep their power intact - and what they might do to anyone who threatens them. Mabel must choose: either expose the ugliness surrounding her and face expulsion from paradise, or keep the family’s dark secrets and make Ev’s world her own.

Every Tuesday, Diane at Bibliophile by the Sea posts the opening paragraph (sometime two) of a book she decided to read based on the opening. Feel free to grab the banner and play along.
Posted by JoAnn at 8:33 AM