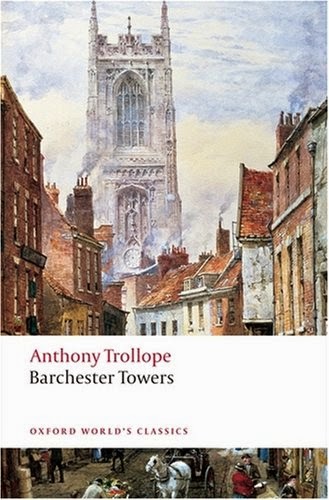 Chapter 1
Who Will Be the New Bishop?

In the latter days of July in the year 185––, a most important question was for ten days hourly asked in the cathedral city of Barchester, and answered every hour in various ways—Who was to be the new bishop?

The death of old Dr. Grantly, who had for many years filled that chair with meek authority, took place exactly as the ministry of Lord –––– was going to give place to that of Lord ––––. The illness of the good old man was long and lingering, and it became at last a matter of intense interest to those concerned whether the new appointment should be made by a conservative or liberal government.

Our #6Barsets Project continues in March/April with the second book in the series, Barchester Towers. I read the first two chapters last night and was delighted when it picked up just a short time after The Warden (which I promise to write about soon) ended.

Here is the blurb from amazon:


Barchester Towers (1857) was the book that made Trollope's reputation and it remains his most popular and enjoyable novel. The arrival of a new bishop in Barchester, accompanied by his formidable wife and ambitious chaplain, Obadiah Slope, sets the town in turmoil as Archdeacon Grantly declares 'War, war, internecine war!' on Bishop Proudie and his supporters. Who will come out on top in the battle between the archdeacon, the bishop, Mr Slope, and Mrs Proudie?

The livelihood of Mr Harding, the saintly hero of The Warden, is once more under threat but clerical warfare finds itself tangled up in the wayward (and sometimes perverse) desires of the many courtships, seductions, and romances of the book. Who will marry Eleanor Bold? Can any man resist the charms of the exotically beautiful 'La Signora Madeline Vesey Neroni'? Will the oily Mr Slope finally get his comeuppance? John Bowen's introduction examines the literary skill with which Trollope combines comedy and acute social and pyschological observation in this new edition.

I can't wait to continue. Would you keep reading? You're welcome to join us.

Every Tuesday, Diane at Bibliophile by the Sea posts the opening paragraph (sometime two) of a book she decided to read based on the opening. Feel free to grab the banner and play along.
Posted by JoAnn at 8:01 AM

Email ThisBlogThis!Share to TwitterShare to FacebookShare to Pinterest
Labels: 6Barsets, classics, Quote of the Week