The Hotel by Elizabeth Bowen 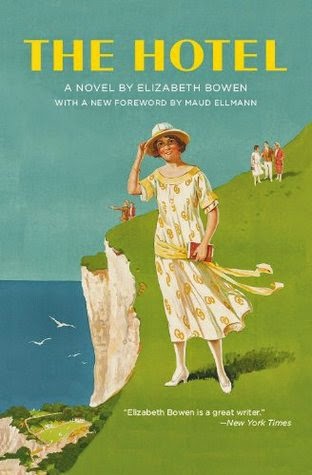 Book Description (from amazon):
Bowen’s first novel, The Hotel, is a wonderful introduction to her disarming, perceptive style. Following a group of British tourists vacationing on the Italian Riviera during the 1920s, The Hotel explores the social and emotional relationships that develop among the well-heeled residents of the eponymous establishment. When the young Miss Sydney falls under the sway of an older woman, Mrs. Kerr, a sapphic affair simmers right below the surface of Bowen’s writing, creating a rich story that often relies as much on what is left unsaid as what is written on the page. Bowen depicts an intense interpersonal drama with wit and suspense, while playing with and pushing the English language to its boundaries.

I usually love character-driven novels and the idea of a group of characters in a closed setting (a hotel on the Italian Riviera in the 1920's in this case) sounds especially appealing. But for such a short book, The Hotel took me an awfully long time to read.

The Hotel is not a novel to read for the story; there is actually very little in the way of plot. It's all about relationships - some existing, but most are new. It is well-written and perceptive, but it's also cold... distant, chilly, perhaps even clinical. Bowen seems to feel no warmth toward her characters, and as a result, I felt none either. Whenever I put the book down, there was never a hurry to pick it up again.

I read The House in Paris several years ago and, while I liked it better than The Hotel, the same coolness was present and it was also a very slow read. I wonder if this is true for all of Bowen's novels.

I hate to say it, but the cover was my favorite part of this book.

Bottom line:
The Hotel  is beautifully written and insightful, but somewhat cold and not especially compelling,
Posted by JoAnn at 5:30 AM