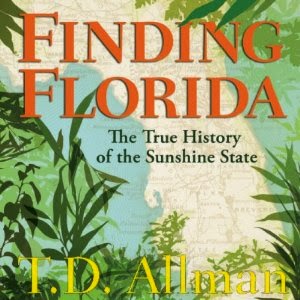 1
BELIEVE IT OR NOT

You don't need a GOS to search out the meaning of Florida, though it helps. To get started, tap in the following address: 11 Magnolia Avenue, St. Augustine. You'll know you're drawing close to the wellspring of Florida's identity when you reach the intersection of Ponce de Leon Boulevard and Matanzas Avenue. Those names mark a traffic intersection. They also describe an intersection of myth and reality. Generations of Americans have grown up believing Ponce de Leon discovered Florida while searching for eternal youth, but what does "Matanzas" mean? As they drive along Matanzas Boulevard or power-boat along the Matanzas River, few understand that this mellifluous-sounding Spanish name means "slaughter" or "massacre." Thus, in English, St. Augustine's marina-fringed harbor, Matanzas Bay, could be rendered "Slaughter Bay."

I started listening to this audiobook because we plan to spend much of the winter in Florida and I want to learn a little more about the state's history. What I'm learning from this book is that many of the lessons taught to local school children may, in fact, by myth. So far, this relatively controversial book has been quite interesting.


Over its long history, Florida has been many things: a native realm protected by geography; a wilderness that ruined Spanish conquistadors; a place to start over; "god's waiting room." With a native population as high as 900,000 (who all died), it became a pestilential backwater with a few thousand inhabitants, but today is our fourth most populous state, with nineteen million. The site of vicious racial violence, including massacres, slavery, and the roll-back of Reconstruction, Florida is now one of our most diverse states, a dynamic multicultural place with an essential role in 21st century America.

However, the remarkable story of Florida has been distorted and whitewashed. In Finding Florida: The True History of the Sunshine State, journalist T.D. Allman reclaims this remarkable history from the mythologizers, apologists, and boosters.

Allman traces the discovery, exploration, and settlement of Florida, its transformation from a swamp to a paradise. Palm Beach, Key West, Miami, Tampa, and Orlando boomed, fortunes were won and lost, land was stolen and flipped, and millions arrived.

The product of a decade of research and writing, Finding Florida is a highly original, stylish, and masterful work, the first modern comprehensive history of this fascinating place.