The End of Your Life Book Club by Will Schwalbe 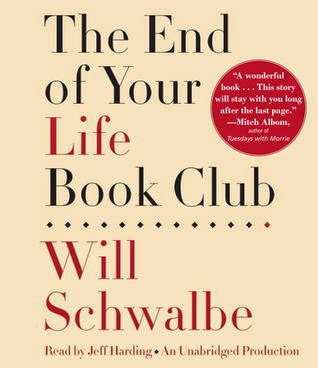 The End of Your Life Book Club
by Will Schwalbe
narrated by Jeff Harding
Random House Audio, 2012
9 hours and 40 minutes
source: purchased

Publisher's Summary:
"What are you reading?"

That's the question Will Schwalbe asks his mother, Mary Anne, as they sit in the waiting room of the Memorial Sloan-Kettering Cancer Center. In 2007, Mary Anne returned from a humanitarian trip to Pakistan and Afghanistan suffering from what her doctors believed was a rare type of hepatitis. Months later she was diagnosed with a form of advanced pancreatic cancer, which is almost always fatal, often in six months or less.

This is the inspiring true story of a son and his mother, who start a "book club" that brings them together as her life comes to a close. Over the next two years, Will and Mary Anne carry on conversations that are both wide-ranging and deeply personal, prompted by an eclectic array of books and a shared passion for reading. Their list jumps from classic to popular, from poetry to mysteries, from fantastic to spiritual. The issues they discuss include questions of faith and courage as well as everyday topics such as expressing gratitude and learning to listen. Throughout, they are constantly reminded of the power of books to comfort us, astonish us, teach us, and tell us what we need to do with our lives and in the world. Reading isn't the opposite of doing; it's the opposite of dying.

Will and Mary Anne share their hopes and concerns with each other - and rediscover their lives - through their favorite books. When they read, they aren't a sick person and a well person, but a mother and a son taking a journey together. The result is a profoundly moving tale of loss that is also a joyful, and often humorous, celebration of life: Will's love letter to his mother, and theirs to the printed page.

I always steer clear of memoirs dealing with illness or death of a parent, yet cannot resist books about books. For that reason, The End of Your Life Book Club  presented an unusual dilemma. My solution in this case was to avoid the book... and I did for nearly two years until curiosity finally won out. I gave in and listened earlier this fall.

Will's mother, Mary Anne, was a remarkable woman, very much loved by her family. After her diagnosis, Will and Mary Anne formed a two person book club which met at Memorial Sloan-Kettering during chemotherapy sessions. They read (or reread) many interesting books and their discussions provided a means of sharing thoughts on life and, eventually, death.

It is, of course, still a memoir about the illness and death of a parent, but because books and book discussion provide the structure, it was nowhere near as depressing as I'd anticipated.

Now for the books...

It made me want to reread several favorites including:
Crossing to Safety  by Wallace Stegner
The Uncommon Reader  by Alan Bennett
The Painted Veil  by W. Somerset Maugham
Brooklyn  by Colm Tóibín

I also made a long list of books to investigate:
The Etiquette of Illness  by Sue Halpern
Daily Strength for Daily Needs  by Mary W. Tileston
Marjorie Morningstar  by Herman Wouk
Gilead  by Marilynne Robinson (on my shelf)
Brat Farrar  by Josephine Tey
The Magic Mountain  by Thomas Mann (on my shelf)
A Long Way Gone: Memoirs of a Boy Soldier  by Ishmael Beah
My Father's Tears: And Other Stories  by John Updike


I was learning that when you're with someone who is dying, you may need to celebrate the past, live the present, and mourn the future all at the same time.

If I'd read a print copy, there would be many, many more quotes to share, but that's almost impossible with an audiobook.

About the audio production:
Jeff Harding is no stranger to audiobook narration, but this was my first experience with his work. He did an excellent job narrating and immediately drew me into Will's story. In fact, I often wondered if it was actually Will doing his own narration. I would gladly listen to him again.

Bottom line:
If you enjoy books about books, don't be put off because this one is also about death and dying.