Empty Mansions: The Mysterious Life of Huguette Clark and the Spending of a Great American Fortune by Bill Dedman and Paul Clark Newell Jr. 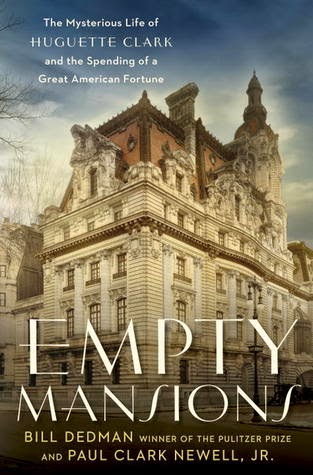 Publisher's Summary:
When Pulitzer Prize-winning journalist Bill Dedman noticed in 2009 a grand home for sale, unoccupied for nearly 60 years, he stumbled through a surprising portal into American history. Empty Mansions is a rich mystery of wealth and loss, connecting the Gilded Age opulence of the 19th century with a 21st-century battle over a $300 million inheritance. At its heart is a reclusive heiress named Huguette Clark, a woman so secretive that, at the time of her death at age 104, no new photograph of her had been seen in decades. Though she owned palatial homes in California, New York, and Connecticut, why had she lived for 20 years in a simple hospital room, despite being in excellent health? Why were her valuables being sold off? Was she in control of her fortune, or controlled by those managing her money?

Dedman has collaborated with Huguette Clark’s cousin, Paul Clark Newell, Jr., one of the few relatives to have frequent conversations with her. Dedman and Newell tell a fairy tale in reverse: the bright, talented daughter, born into a family of extreme wealth and privilege, who secrets herself away from the outside world.

Empty Mansions reveals a complex portrait of the mysterious Huguette and her intimate circle. We meet her extravagant father, her publicity-shy mother, her star-crossed sister, her French boyfriend, her nurse who received more than $30 million in gifts, and the relatives fighting to inherit Huguette’s copper fortune. Empty Mansions is an enthralling story of an eccentric of the highest order, a last jewel of the Gilded Age who lived life on her own terms.

If ever there was a book perfectly suited to a read/listen combination, Empty Mansions is it. The text includes photos, charts, lists, etc., but the audio version includes recorded conversations between Huguette Clark and her nephew, the book's co-author, Paul Clark Newell, Jr.

The beginning of this book is slow going. It's mostly about Huguette's father, W.A. Clark, and how he became the richest man in American history you've never heard of. Your patience may be tested, but the background provided in this section is essential for a clear understanding of Huguette. The audio production and Kimberly Farr's excellent narration helped pull me through to the main attraction.

Huguette Clarke's story is much more interesting and, once the focus shifted to her, any thoughts of putting the book aside vanished. She was ultra-wealthy, extremely reclusive, and passionately interested in art, music, dolls and dollhouses, and Japanese culture. When she died in 2011 at 104, her closest relatives hadn't seen her in decades.

The question is whether she was manipulated by those closest to her (accountants, lawyers, and nurses were gifted huge sums of money), or simply shy, but happy within the narrow boundaries she imposed upon herself. Huguette's voice, as heard in phone conversations included in the audio version, certainly gives the impression of an alert, engaged, and cheerful woman. In many ways she reminded me of my husband's great aunt, who also lived to be 104 and read The Wall Street Journal until the day she died.

Book club reaction:
My book club's reaction to Empty Mansions was lukewarm, at best. Several member did not finish the book. They gave up during the early history of the Clark family and never even got to Huguette's story. The comment "too boring" came up repeatedly and we did not have much of a discussion. My reaction was the most favorable.

Several group members are audiobook fans and I suspect they would have enjoyed the book more if they'd listened.

Bottom line:  I recommend listening to this book, but be sure to borrow a print copy and take a look at the photographs.