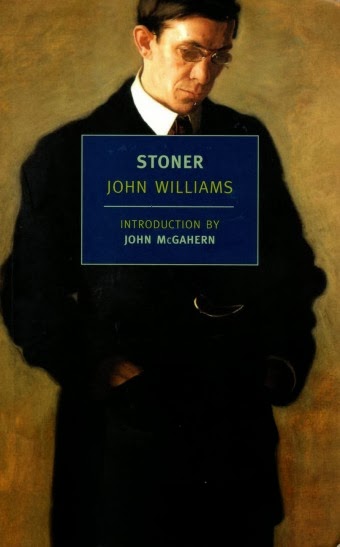 "In his extreme youth Stoner had thought of love as an absolute state of being to which, if one were lucky, one might find access; in his maturity he had decided it was the heaven of a false religion, toward which one ought to gaze with with an amused disbelief, a gently familiar contempt, and an embarrassed nostalgia. Now in his middle age he began to know that it was neither a state of grace or an illusion; he saw it as a human act of becoming, a condition that was invented and modified moment by moment and day by day, by the will and the intelligence and the heart."  (page 195)

Unfortunately, this has become a habit - the more I like a book, the more I procrastinate writing a blog post. The task of finding the right words to convey what I loved about the book seems overwhelming. Let me say that Stoner by John Williams is undoubtedly my favorite book of 2013. It has also earned a spot on my list of all-time favorites.

The novel, first published in 1965 and purchased after reading Matt's glowing review, has been on my shelf for nearly two years, but I should never have waited that long to read it. With a thoughtful, introspective tone, this book begs to be read slowly, savoring every word. My heart literally ached with sympathy for the main character. If a quiet character study in an academic setting and the most beautiful writing imaginable appeals to you, Stoner  is not to be missed.