Read-Along Fail: If on a Winter's Night a Traveler

Read-alongs are the best, even if I ultimately fail to finish... as was the case last month with If on a Winter's Night a Traveler by Italo Calvino. I'd been curious about the book for years, and more than a little intimidated too, so was happy to learn of Care and Melissa's month-long project.

If on a Winter's Night A Traveler is basically a book about reading a book, or more precisely the quest to read a book. Each of ten chapters features the story of the Reader, and later the Other Reader, procuring a book and then the first chapter of that book. The book purchased in chapter one is incomplete, so the Reader tries to obtain another copy in chapter two, but it turns out to be a different book entirely. This continued for five chapters, the Reader still had no success locating the book he originally intended to read (If on a Winter's Night a Traveler) and I'd read introductions to five very different novels along the way.

In the end, I reached the midpoint early, took a short break, and then lost interest. Why? I was actually enjoying the book… which was strange because I usually run from anything even vaguely experimental. Somehow I had managed to relax, let myself go with the flow, and savor Calvino's language and cleverness. I had no idea what he was trying to accomplish, but was able to simply enjoy the ride. The first five chapters went very quickly so, not wanting to get too far ahead, I put the book aside and read my latest book club selection.

When I finally went back to If on a Winter's Night a Traveler, I just couldn't get into it. This time the book beginnings just frustrated me and I became impatient with Calvino. Was it my own tension and impatience building over the upcoming Thanksgiving holiday? Did I feel a need for closure? I'm not entirely sure, but will chalk this failure up to my own mood.

Overall, I experienced surprise, enjoyment, confusion, and frustration while reading If on a Winter's Night a Traveler, but ultimately, have no desire to finish the book.

I did learn two thing from this experience though. First, I am most definitely a "mood" reader and second, I have a hard time reading on a schedule. My mistake here was losing momentum. I should have just written the midpoint post early and kept on reading.

Let this be a lesson for the next read along. 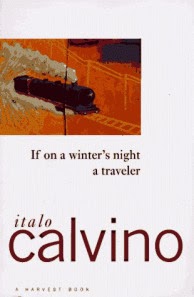