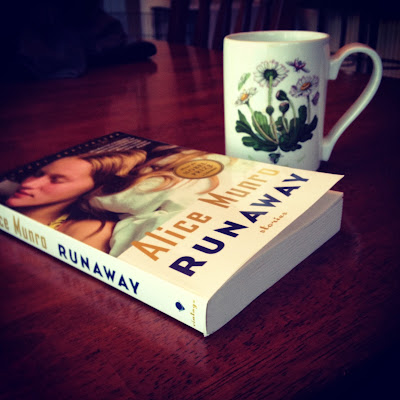 In theory, I suppose it was a good idea -  expand our literary horizons by reading a short story collection from recent Nobel Prize winner Alice Munro. In reality, it was a poorly attended meeting where nobody finished the book.

Five of us gathered (eight is considered a good turnout, though we occasionally get twelve or more for summer pot luck events) Monday morning to discuss Runaway by Alice Munro over coffee and pumpkin bread, but it turned out that none of us had actually finished the book. Two of us had read four of the eight stories, and the others read only one or two. We were unanimously underwhelmed and struggled to maintain a discussion.

So what was the problem? We all liked the writing, but had trouble working up much enthusiasm for the stories themselves. I liked the linked aspect of the stories featuring Juliet at different points in her life. My favorite was "Silence", the third Juliet story, where she loses contact with her now-adult daughter, Penelope. It mostly made me sad, but I really wished for another story told from Penelope's point of view. Other member used words like "weird", "unsatisfying", and "meh" to describe the first two stories. After 15 -20 minutes, the conversation shifted to holiday plans, wedding preparations, and winter travel.

You might remember that this was all my idea. Runaway was chosen because it had the most library copies available. Perhaps her other collections were checked out because they are better? In the end, we were all glad to have tried something new and I'm happy no one is holding this against me. However, I have a feeling it will be a long time before we select another story collection.