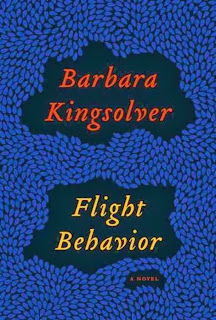 Summary (from amazon):
Flight Behavior  is a brilliant and suspenseful novel set in present day Appalachia; a breathtaking parable of catastrophe and denial that explores how the complexities we inevitably encounter in life lead us to believe in our particular chosen truths. Kingsolver's riveting story concerns a young wife and mother on a failing farm in rural Tennessee who experiences something she cannot explain, and how her discovery energizes various competing factions—religious leaders, climate scientists, environmentalists, politicians—trapping her in the center of the conflict and ultimately opening up her world.

I was a little apprehensive when Flight Behavior  was chosen as a recent book club selection. I've long been a fan of Barbara Kingsolver's writing, but not necessarily her novels... if that make any sense. Years ago when we discussed The Poisonwood Bible, I wasn't able to muster much enthusiasm, though one member found it "life changing". The same held true for my experience with Animal Dreams and Pigs in Heaven. Prodigal Summer, despite being a little preachy, was an exception.  I loved it.

As it turned out, reading Flight Behavior  was a pleasure. The story is engaging and timely, and Dellarobia Turnbow is a wonderfully sympathetic character. Her husband, in-laws, best friend, children, a visiting scientist accompanied by a pack of college students, and a minister are among the wide array of supporting characters populating this novel. The rural Tennessee community is buzzing with activity -  from migrating monarch butterflies and concerns of global warming, to marital and family tensions, religion and Christian values, and the business of raising sheep for wool production. And while it may have gotten a little long in the middle, I enjoyed every moment.


"He'd said good night as if they were friends parting ways, then rolled to his side and slept the sleep of a mountain range while she stared at the black air, dividing the river of her desperation into rivulets until some of them seemed navigable."

"Despite the biological treachery of this snow, its beauty moved her. Even a field of mud and sheep droppings could be rewritten as a clean slate."

"With the sense of a great weight settling, she recognized marriage. Not the precarious risk she'd balanced for years against forbidden fruits, something easily lost in a brittle moment by flying away or jumping a train to ride off on someone else's steam. She was not about to lose it. She'd never had it."