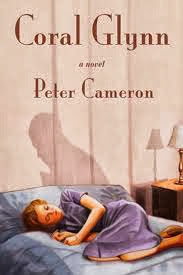 That spring --the spring of 1950-- had been particularly wet.

An area at the bottom of the garden at Hart House flooded, creating a shallow pool through which the crocuses gamely raised their little flounced heads, like cold shivering children in a swimming class. The blond gravel on the garden paths had turned green, each pebble wrapped in a moist transparent blanket of slime, and one could not sit on either of the two cement benches that flanked the river gate without first unhinging the snails and slugs adhered to them.

The excessive moisture of the garden was of no concern to anyone at Hart House except for the new nurse, who had arrived on Thursday, and had attempted, on the two afternoons that were somewhat mild, to sit outside for a moment, away from the sickness and strain of the house. But she found the garden inhospitable, and so had resolved to stay indoors.

After reading about this title at Cosy Books a couple of weeks ago, I decided to request a copy from my library. I'd never heard of the author, but tend to love novels set in an English country home. Although published in 2012, the book has a much older and slightly ominous feel. It may even turn out to be suitable for RIP.

Every Tuesday, Diane at Bibliophile by the Sea posts the opening paragraph (sometime two) of a book she decided to read based on the opening. Feel free to grab the banner and play along.
Posted by JoAnn at 7:42 AM