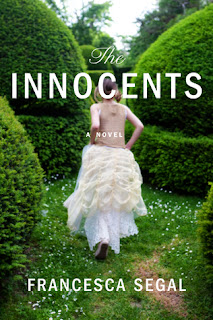 Adam had, for the occasion, bought a new suit. He had wavered between dandyish black, chalk-striped and double-breasted, and a more traditional two-button jacket in deep  navy wool. After some consideration he had chosen the navy. It seemed a more appropriate suit for a man who was newly engaged.

The Innocents
by Francesca Segal

OK, so I'm a little Edith Wharton obsessed this week. After finishing The Age of Innocence  and watching the movie over the weekend, I can't seem to let the story go. The Innocents, inspired by Wharton's masterpiece, is set in a "small, tight-knit Jewish suburb of London".  Audrey and Jane both enjoyed it and it sounded wonderful to me, too, but I  wanted wait until after I'd read  The Age of Innocence. Yesterday, I found it at the library.

I also added my name to the hold list for The Age of Desire by Jennie Fields, a new novel about Wharton's life. Thanks for telling me about this one, Rita!

Every Tuesday, Diane at Bibliophile by the Sea posts the opening paragraph (sometime two) of a book she decided to read based on the opening. Feel free to grab the banner and play along.
Posted by JoAnn at 10:35 AM

Email ThisBlogThis!Share to TwitterShare to FacebookShare to Pinterest
Labels: Edith Wharton, Quote of the Week