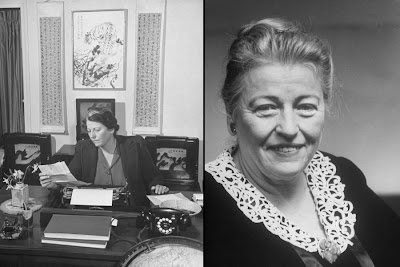 
It's the birthday of novelist Pearl S. Buck (books by this author), born in Hillsboro, West Virginia (1892). Her parents were Presbyterian missionaries in China, and Buck was born while they were on vacation in the United States. When she was three months old, they took her back to China. She learned to speak Chinese before she learned to speak English. She and her brother explored the streets and markets of Zhenjiang, watching puppet shows and sampling food. She was embarrassed by her blue eyes and blond hair, but she didn't let it hold her back. She enthusiastically joined in local celebrations, big funerals, and parties. She said, "I almost ceased to think of myself as different, if indeed I ever thought so, from the Chinese."

She fled China after civil war erupted and began writing a novel on the ship to America called East Wind, West Wind (1930). The following year, she published The Good Earth, about a Chinese peasant who becomes a wealthy landowner. At the time, Westerners saw China as one of the most exotic places on earth. Pearl Buck was the first writer to portray the ordinary lives of Chinese people for a Western audience. The novel won a Pulitzer Prize and became an international best-seller.

Buck turned out more than 85 novels and collections of short stories and adopted nine children. In 1938, she won the Nobel Prize in literature. Later, she became active in the civil rights and women's movements, and she founded the first international, interracial adoption agency in the United States.


I have enjoyed several of Buck's novels over the years and consider The Good Earth is a personal favorite. Most recently, I have listened to Pavilion of Women and Peony: A Novel of China. Imperial Women is on my Classics Club list and I plan to read it within the next year. Have you read Pearl S. Buck?