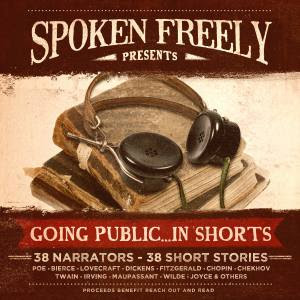 June is Audiobook Month and the audiobook community is giving back! Spoken Freely, a group of 30+ professional narrators, has teamed with the Going Public Project to offer a serialized audio story collection: Going Public...in Shorts.

Each narrator has recorded a short piece from the public domain and will be hosted on various blogs throughout the month of June. One or two stories will also be released online each day via the Going Public blog. As a "Thank you!" to listeners, stories will be available to listen to online for free for one week following their release. The full schedule of story release dates and narrator appearances is available at Going Public.

In collaboration with Blackstone Audio, stories will also be available for download purchase starting on their day of release, with the full compilation available beginning June 30th. All sales proceeds go directly to Reach Out and Read, an innovative literacy advocacy organization serving more than 4 million children and their families across the nation, with an emphasis on serving those in low-income communities. 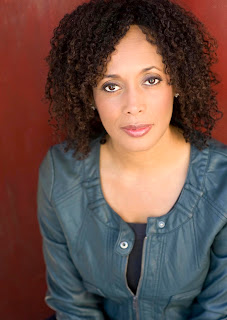 I am thrilled to host narrator Robin Ray Eller, reading "The Yellow Fairy Book: How To Tell A True Princess", by Andrew Lang. Robin is an actress, narrator, singer and dance educator.  She has appeared on stage, in films, television and numerous commercials. As a dancer, in addition to other credits, she traveled the world with the legendary James Brown, “The Godfather of Soul.”

Robin's  recording of  The Yellow Fairy Book: How To Tell A True Princess, by Andrew Lang is available for download at Downpour.

LM: Welcome to Lakeside Musing, Robin. I've been an avid audiobook listener for over ten years and am very excited to be part of this project.  Your background in the arts is so varied, I have to ask how you decided to narrate audiobooks. It seems like such an exotic job.

RRE:  I’m smiling at your thinking that narrating is an exotic job. I like to think so, too. Oddly, the suggestion to become an audiobook narrator came about 13 years ago during a six week voice over workshop. At the time I was busy performing: doing musical theater, booking commercials, training as an on-camera actress and landing small speaking roles on soap operas. Even after eventually recording my demo, pursuing a career in audiobooks still seemed overwhelming.

A volunteer experience with Read Across America, sponsored by AFTRA (American Federation of Television and Radio Artists), finally convinced me. I spent the afternoon reading to third graders on Dr. Seuss’s birthday and something just clicked inside of me. Despite my fear of having lost time, I had to get back out there in the audiobook arena. I was casted in a full-cast audio theater book (a charity project for Wavedancer Foundation in memory of narrator Frank Muller) that ended up being published by Blackstone Audio. What I remember most about recording this book is the feeling that I was home and it was time to go on the audiobook journey.

LM: You are reading "The Yellow Fairy Book: How To Tell A True Princess" by Andrew Lang,  a short retelling of The Princess and The Pea. Does your choice of a fairy tale have special significance?

RRE: The fairy tale is a nostalgic choice - I would get lost in fairly tales as a child. This is such a short, sweet story and I always took away the message to “never judge a book by its cover.”  I used to read fairy tales to my younger brother, helping him learn how to read before he attended kindergarten. I also worked as a teacher’s aide in high school and read to elementary school students.

As an adult, fairy tales were instrumental in helping me learn Italian. Recording my teacher as she read them was a useful tool because it helped me recognize and understand the stress in multi-syllable words. I would also record myself so I could hear the difference. Italian is like singing, which I do as well. It’s important to understand the melody and where it’s appropriate to stress a word.

LM: I know we should talk more about audiobooks, but I can't resist asking about Italy! You speak the language and are a seasoned traveler, while I aspire to learn Italian and discover my roots.  Do you return to the same place year after year, or do you like to explore new regions?

RRE: I return to Rome every year because my best friend/Italian sister is there, along with many other friends. I also have a dear friend in Milan who has been so generous to me over the years. But each time I go to Italy, there is some other area to explore.

LM: If you had to choose one favorite place in Italy, what would it be?

RRE: It’s difficult to say what my favorite place is because there have been incredible experiences in every place I’ve visited. My sister Roberta introduced me to a beautiful island called Filicudi and, since I’ve been there four times, I would have to say this is number one. It is where I fell in love with the Mediterranean Sea. Filicudi is the second smallest of the eight Aeolian Islands, located north of Sicily.  From a port city, one must take a ferry or the aliscafo (jet hydrofoil) in order to get there. This island is magical; especially if one's mind and heart is open to the experience.

During my four visits to Filicudi, I formed friendships with Italians from other regions of the country.  Italians are super friendly and they would invite me to visit their region. I couldn’t refuse an opportunity to build on these friendships and experience another region as a “local” instead of a tourist. 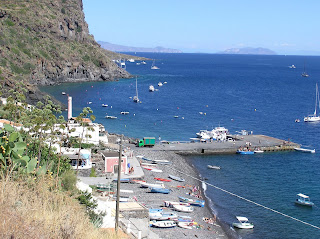 LM: My Italian grandmother was an excellent cook and many of her stories centered around food and family. You must have experienced some great meals in Italy.

RRE:  Eating an entire meal can take up to four hours or more, so there is plenty of time to share stories. I love how everyone enjoys the conversation and eats slowly. The meals are served in four courses, so one has time to eat, digest and eat again. The food is always fresh and simply delicious, but the best part is the quality time everyone shares. At restaurants, one is not hurried to have coffee and pay the check as in some restaurants here. The owner wants you to stay as long as you want. In some cases, I have experienced the owner sitting down and enjoying wine with us.

LM: I could totally see myself doing a culinary tour of Italy one day. Do you consider yourself a foodie?

RRE: I’m not a foodie in the sense that others are. I have an allergy to certain foods which forces me to question how things are made. I am allergic to dairy products. All the great cheeses in Italy are not to be had.  Che triste = How sad!!  Needless to say, the first Italian sentence I learned was how to tell people about my allergy. Fortunately, there is so much wonderful fish, fresh vegetables and pastas to eat. I can’t get a bad meal in Italy.  I have a weakness for a good linguine alle vongole = linguine with clams made Naples style. I love southern Italian cooking!  I love the granita in Sicily, too, and will often have one before heading off to the beach.

LM: Now you're making me hungry! My grandparents came from southern Italy and my extended family still gathers for the traditional Sunday dinner - featuring pasta, of course.

RRE:  I must confess to being a pasta snob. If it’s not prepared “al dente”, I don’t want to eat it.  I confess to having thrown away the pasta because it was overcooked. I try not to waste food and end up using it to make a frittata. There is huge difference between how pizza and pasta is made in Italy and what can be found in some areas of the USA.  One has to be born with what I call, “Italian love” that is put into the food. There is no pretending there.  No matter what I think I master after cooking with my friends, there is something that one just has to be raised doing in the kitchen.  I am told that I do well; considering I was born in Italy in “another life.

What would your ideal day in Italy look like?

RRE:  My ideal day in Italy depends on where I am. If I’m on the island, then it requires a lot of walking and climbing to get to the great part of the beach. After snorkeling for as long as I could, I’d either read on the beach or fall asleep.  Later in the early evening; everyone would gather in front of the legendary “Triolo” to have an aperitivo which consisted of drinking malvasia and sharing about their day. This is where we usually heard about the “happenings” for the night.

In Rome, my day might just consist of walking around the city, going to a museum, visiting with friends, and making new acquaintances with the local proprietors. At my friend's Enoteca (wine shop), I would sometimes help English-speaking tourists with their Italian. Then I would translate from English to Italian so my friend could understand. It was great practice. During the evenings I visited with friends and sometimes sang with a pianist friend or, if I’m lucky, my guitarist friend’s cover band. I’ve done a few performances in Italy as a singer.  I always bring my charts (sheet music). The day and evening are never written in stone - which makes for great adventures!


LM: Thanks for talking about Italy and audiobooks with me, Robin. I'm ready to start planning my trip!


FOR MORE GOING PUBLIC ... IN SHORTS:

Going Public...in Shorts is made possible by the efforts of the Spoken Freely narrators and many others who donated their time and energy to bring it to fruition. Engineering and mastering provided by Jeffrey Kafer and SpringBrook Audio. Graphic design provided by f power design. Published by Blackstone Audio. Project coordination and executive production provided by Xe Sands.