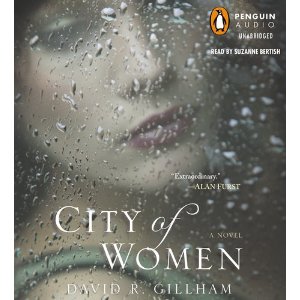 "The Blind man taps his cane rhythmically. Three taps, three taps, three taps to gain the attention of passing Berliners. He is a cadaverous sentry with a shaved pate under an old soldier’s cap, selling pencils from a canister strung about his neck. A pyramid of dots are stamped onto the armband he wears, and his round black goggles are like two holes poked through the day, letting the night bleed through. Sigrid fishes out the coin purse from her bag as she emerges from the U-Bahn stairwell, and drops a few groschen into his cup, “Bless you,” he rasps in answer to the jangle. “Please choose a pencil.” She thanks him, but when he turns his head in the direction of her voice, something behind the blindness of those goggles seems to mark her. She puts the pencil into her handbag and crosses the street at the signal."

My current audiobook (on CD in the car) is both tense and intense. Enjoyment is not really the correct word, but it sure is compelling.