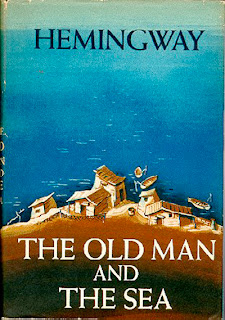 The Old Man and The Sea by Ernest Hemingway was published.

It was on this day in 1952 that Ernest Hemingway published The Old Man and the Sea (books by this author). For years, he had been living in Cuba and working on an epic novel about the sea, but he couldn't quite get it right. So he decided to publish a small piece of it, just 27,000 words long, which he called The Old Man and the Sea. He released it in the September 1st issue of Life magazine, which cost 20 cents. That month, it was published by Charles Scribner's Sons for $3.

Hemingway's last major work had been For Whom the Bell Tolls, published 12 years earlier in 1940. His book Across the River and Into the Trees (1950) sold fewer than 100,000 copies, all the critics panned it, and there was a general feeling that maybe Hemingway's best days as a writer were passed. The Old Man and the Sea changed all that. The Life version sold more than 5 million copies in two days, and it was a best-seller in book form, as well.

In it, Hemingway wrote: "The shark swung over and the old man saw his eye was not alive and then he swung over once again, wrapping himself in two loops of the rope. The old man knew that he was dead but the shark would not accept it. Then, on his back, with his tail lashing and his jaws clicking, the shark plowed over the water as a speed-boat does. The water was white where his tail beat it and three-quarters of his body was clear above the water when the rope came taut, shivered, and then snapped. The shark lay quietly for a little while on the surface and the old man watched him. Then he went down very slowly. 'He took about forty pounds,' the old man said aloud. He took my harpoon too and all the rope, he thought, and now my fish bleeds again and there will be others. [...] It was too good to last, he thought. I wish it had been a dream now and that I had never hooked the fish and was alone in bed on the newspapers. 'But man is not made for defeat,' he said. 'A man can be destroyed but not defeated.'"

It was the last book that Hemingway published during his lifetime; in 1961, with his physical and mental health deteriorating, he committed suicide.


I've long considered myself a Hemingway fan, but hated The Old Man and the Sea when it was assigned in high school. My favorites over the years have been A Moveable Feast and The Garden of Eden. Perhaps today would be a fitting day to revisit this classic. I wonder if I'll have a different reaction.

Have you ever reread a classic you despised high school? Was the experience different? What is your favorite Ernest Hemingway title?