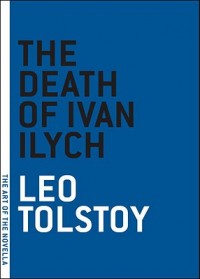 "In the big building of the law courts, during a break in hearing the case of the Melvinskys. the members and the prosecutor met in Ivan Yegorovich Shebek's office, and the conversation turned to the famous Krasovsky case. Fyodor Vassilievich became heated demonstrating non-jurisdiction, Ivan Yegorovich stood his ground; as for Pyotr Ivanovich, not having entered into the argument in the beginning, he took no part in it and was looking through the just-delivered Gazette.
"Gentlemen," he said, "Ivan Ilyich is dead!'
"Can it be?"
"Here, read it," he said to Fyodor Vassilievich, handing him the paper still smelling of fresh ink.

The Death of Ivan Ilyich
by Leo Tolstoy

Today I'm starting book number two for The Art Of The Novella Challenge.  I read The Death of Ivan Ilych in college,  but have no memory of it. I wonder if it will start to sound familiar soon...

Email ThisBlogThis!Share to TwitterShare to FacebookShare to Pinterest
Labels: Art of the Novella, Quote of the Week