The Dead by James Joyce 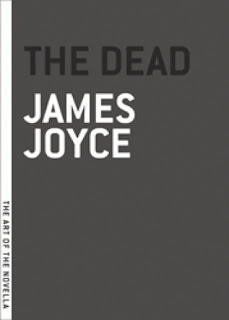 "Better pass boldly into that other world, in the full glory of some passion, than fade and wither dismally with age."

Summary:
Often cited as the best work of short fiction ever written, Joyce's elegant story details a New Year's Eve gathering in Dublin that is so evocative and beautiful that it prompts the protagonist's wife to make a shocking revelation to her husband—closing the story with an emotionally powerful epiphany that is unsurpassed in modern literature. (from Melville House)


My thoughts:
So maybe all this hand-wringing at the mere suggestion of reading James Joyce isn't totally warranted after all. Last year, I cautiously began reading a few stories from Dubliners. They weren't as convoluted or obtuse as I'd expected and, in fact, I actually liked them. The Dead, the last and longest story of the collection, has been included in the Melville House Art of the Novella series.

I loved the story, the writing, the physical descriptions (especially of the two aunts) but, oh, the ending.....

"A few light taps upon the pane made him turn to the window. It had begun to snow again. He watched sleepily the flakes, silver and dark, falling obliquely against the lamplight. The time had come for him to set out on his journey westward. Yes, the newspapers were right: snow was general all over Ireland. It was falling on every part of the dark central plain, on the treeless hills, falling softly upon the Bog of Allen and, farther westward softly falling into the dark mutinous Shannon waves. It was falling, too, upon every part of the lonely churchyard on the hill where Michael Furey lay buried. It lay thickly drifted upon the crooked crosses and headstones, on the spears of the little gate, on the barren thorns. His soul swooned slowly as he heard the snow falling faintly though the universe and faintly falling, like the descent of their last end, upon all the living and the dead."

Links to other Art of the Novella challenge posts can be found here.
Posted by JoAnn at 10:16 PM

Email ThisBlogThis!Share to TwitterShare to FacebookShare to Pinterest
Labels: Art of the Novella, James Joyce