Paris in July wouldn't be complete without spending time with Emile Zola. My fascination began about eighteen months ago when a former blogger's review inspired me to pick up Therese Raquin (my review). The novels offers an amazing portrayal of the effects of guilt and is truly one of the best psychological dramas I've read.
The Classics Circuit's April tour provided the motivation to return to Zola. This time, I chose The Ladies' Paradise (my review) from the Les Rougon Macquart twenty novel series. The 1883 novel focuses on the rise of the modern department store in Paris and has a surprisingly contemporary feel. From the owner/capitalists, to the workers, to the nearby small businessmen with eroding livelihoods, Zola puts a face to all sides of the issue... and I put Zola on my list of favorite authors. 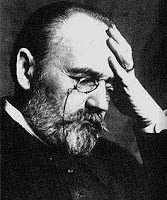 On my most recent visit to New York City, there was an opportunity to browse the cozy Shakespeare & Co.'s Broadway location. Lately, I have fallen into the habit of perusing the "Z" shelves. Without fail, the only titles available in my city are Therese Raquin, Nana, and Germinal, so I'm always curious to see what else might be out there.

Several out of the ordinary titles were in stock, but it was The Belly of Paris that caught my eye. I love food, cooking, and culinary concerns in general (Lakeside Kitchen is my other blog), plus I was reminded of Karen's wonderful review.  There were even two translations available! This was too good to pass up.  After sampling a portion of each, I settled on the Modern Library Classics edition translated by Mark Kurlansky. My plan is to read this in the fall. 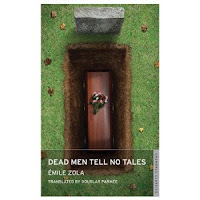 Finally, there was the collection of short stories Dead Men Tell No Tales. Regular reader of this blog know I rediscovered short stories last year and try to participate in Short Story Monday regularly. How could I pass up an opportunity to sample some of Zola's short fiction?
"The Girl Who Loves Me", written in 1864 when Zola was just 24 years old, appeared in his first collection of stories. The eleven pages center around a carnival attraction called The Mirror of Love. For a mere two sous, men are encouraged to step forward and gaze upon "the girl who loves you".
The story opens with the narrator's speculation on the girl's identity:

"Is the girl who loves me a fine lady dressed in silk and lace and jewels, reclining on a sofa in her boudoir, dreaming of our love? Is She a marchioness or a duchess, as light-footed and dainty as a dream, languorously trailing her long flowing white gown over sumptuous rugs with a charming pout, softer than a smile, on her lips?"

It moves on with a beautiful, detailed description of the fair itself. I was reminded of passages from The Ladies Paradise describing gorgeous silks or those in Therese Raquin when Camille's decomposing body lies in the morgue. Zola certainly paints a vivid picture with his words!
Eventually, the story settles into themes his novels will explore in greater detail. Human wants and desire are examined. Zola shows what happens when they collide with life's harsh realities. This is definitely the work of the young writer whose work would come to be so strongly associated with Naturalism. I'll continue reading this collection throughout the summer.
Have you read Zola? Do you plan to? Paris in July (hosted by Karen and Tamara) would be an idea time to start.
Posted by JoAnn at 2:51 PM