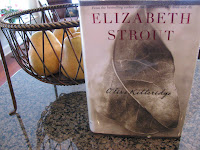 Publisher's blurb:
In a voice more powerful and compassionate than ever before, New York Times bestselling author Elizabeth Strout binds together thirteen rich, luminous narratives into a book with the heft of a novel, through the presence of one larger-than-life, unforgettable character: Olive Kitteridge.
At the edge of the continent, Crosby, Maine, may seem like nowhere, but seen through this brilliant writer’s eyes, it’s in essence the whole world, and the lives that are lived there are filled with all of the grand human drama–desire, despair, jealousy, hope, and love.
At times stern, at other times patient, at times perceptive, at other times in sad denial, Olive Kitteridge, a retired schoolteacher, deplores the changes in her little town and in the world at large, but she doesn’t always recognize the changes in those around her: a lounge musician haunted by a past romance: a former student who has lost the will to live: Olive’s own adult child, who feels tyrannized by her irrational sensitivities; and Henry, who finds his loyalty to his marriage both a blessing and a curse.
As the townspeople grapple with their problems, mild and dire, Olive is brought to a deeper understanding of herself and her life–sometimes painfully, but always with ruthless honesty. Olive Kitteridge offers profound insights into the human condition–its conflicts, its tragedies and joys, and the endurance it requires.

Olive Kitteridge. Remember that name...we'll surely be hearing it again. It has recently been named a National Book Critics Circle Award finalist (the full list is here) and I'm predicting we'll also see it on many of the lists we bloggers churn out at the end of the year.
What is it about Olive? She is not a particularly likable character, yet I can't stop thinking about her. Perhaps it's that I see something of myself in her...pragmatic, sometimes impatient and short-tempered, but also compassionate and insightful. The stories follow Olive over time from a young wife and mother to a 70-something grandmother, and evoke a full range of emotions as her character unfolds.
I marked passages in every story, but this is my favorite. From "River", the final story, page 270:

"Oh, what young people did not know. They did not know...that love was not
to be tossed away carelessly, as if it were a tart on a platter with others that
got passed around again. No, if love was available, one chose it, or didn't
choose it. And if her platter had been full with the goodness of Henry and she
had found it burdensome, had flicked it off crumbs at a time, it was because she
had not known what one should know: that day after day was unconsciously
squandered."

There were many, many other passages just as lyrical and insightful. I loved this book, beautifully written with such brutal honesty, about what it is to be human.
This will complete mini challenge #1 (read a collection of short stories and blog about it) of the 2009 mini challenges.