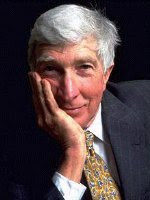 John Updike died yesterday, at the age of 76, of lung cancer. The New York Times obituary has a brief overview of his career.
Updike was an incredibly prolific author, and one that I always meant to read more of. My introduction to his work came in late high school with a short story or two, but it was 20 years later, in 1997, that I became a fan. With our youngest children off to nursery school, the moms of playgroup decided to become a book club. We chose Updike's In The Beauty of The Lilies as an early selection and I was hooked...the sentences, the vocabulary, the insights. It was one of my favorite books that year.
Since then, I've enjoyed John Updike's essays and reviews in The New Yorker, but have yet to read another novel. I did listen to Villages on CD in 2004 and was underwhelmed, but attributed it to the audio format. Brazil and Rabbit, Run sit unread on my shelves. In The Beauty of The Lilies is still there, too, awaiting a reread. Additionally, I'd planned to read The Witches of Eastwick last summer, in anticipation of the release of The Widows of Eastwick. At least three more of Updike's novels are on my Amazon wish list. It saddens me that there will be no new novels, or essays, or reviews in the New Yorker, but John Updike leaves behind a body of work vast enough to keep readers reading for a long, long time.