A Doll House by Henrik Ibsen 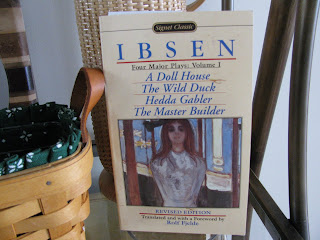 The first mini-challenge has been completed! Since the last time I read a play was back in high school, I decided to start with challenge #2 - simply to read a play.

Henrik Ibsen (1828-1906) was a Norwegian playwright often referred to as the father of the modern drama. His play A Doll House (1879) has been characterized as "a scathing criticism of the blind acceptance of traditional roles of men and women in Victorian marriage".

The main characters of the play are Torvald Helmer, a banker recently given a promotion, and his young wife Nora. We quickly gain insight into their relationship as Torvald appears to trivialize Nora by repeatedly likening her to various small animals:

"Why shouldn't I look at my dearest possession? At all that loveliness that's mine, mine alone, completely mine?" (Act Three)

An incident of threatened blackmail brings Nora to reveal her frustration with the marriage:
"But our home's been nothing but a playpen. I've been your doll-wife here, just as at home I was Papa's doll-child. And in turn the children have been my dolls. I thought it was fun when you played with me, just as they thought it was fun when I played with them. That's been our marriage, Torvald." (Act Three)

At just over 70 pages, this is a short three-act play and I hesitate to reveal much more of the plot. It's pretty mild stuff when measured against today's standards, but it's easy to understand why it was considered scandalous at the time. Reading a play was a welcome change of pace and I will not wait another thirty years before reading another, but they probably won't become a regular part of my literary diet.