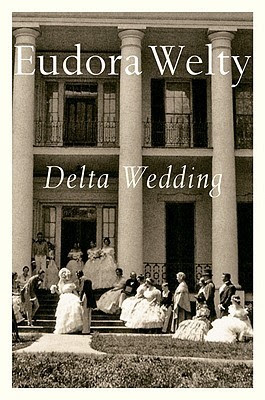 
Motivation for reading: This was my first book for the Back to the Classics Challenge (in the classic by a female author category)...  and also a read-along with Audrey.

Publisher's summary:
Set on the Mississippi Delta in 1923, this story captures the mind and manners of the Fairchilds, a large aristocratic family, self-contained and elusive as the wind. The vagaries of the Fairchilds are keenly observed, and sometimes harshly judged, by nine-year-old Laura McRaven, a Fairchild cousin who takes The Yellow Dog train to the Delta for Dabney Fairchild's wedding. An only child whose mother has just died, Laura is resentful of her boisterous, careless cousins, and desperate for their acceptance. As the hour moves closer and closer to wedding day, Laura arrives at a more subtle understanding of both the Fairchilds and herself.


The nickname of the train was the Yellow Dog. Its real name was the Yazoo-Delta. It was a mixed train. The day was the 10th of September, 1923 - afternoon. Laura McRaven, who was nine years old, was on her first journey alone. She was going up from Jackson to visit her mother's people, the Fairchilds, at their plantation named Shellmound, at Fairchilds, Mississippi. When she got there, "Poor Laura, little motherless girl," they would all all run out and say, for her mother had died in the winter and they had not seen Laura since the funeral. Her father had come as far as Yazoo City with her and put her on the Dog. Her cousin Dabney Fairchild, who was seventeen, was going to be married, but Laura could not be in the wedding for the reason that her mother was dead. Of these facts, the most persistent one in Laura's mind was the most intimate one: that her age was nine.

A large extended family gathers on the Mississippi Delta in 1923 for a wedding... and that's about it. Not much happens, but the story is not the main attraction. Instead, Welty examines the setting and her characters.

As I've learned from previous experience with this author, it's all about the writing. Welty's words are beautifully, almost magically, put together. Her lush descriptions bring the southern landscape to life and I've also come to expect a keen psychological exploration of her characters.

Delta Wedding  should ideally be read when in a patient, contemplative mood. Unfortunately, that was not the case for me this month. While I should have been focusing on the beautiful quotations, I found myself wishing something -- anything -- would happen.

I decided on a read/listen combination for this book and must give credit to the audio version narrated by Sally Darling. Her southern accent provided additional atmosphere to Welty's words but, in the end, I even ended up listening at a faster speed.

Could this be a case of the right book at the wrong time? It's entirely possible. I shared my thoughts on The Optimists's  Daughter  in 2011 and, overall, preferred that novel to Delta Wedding.