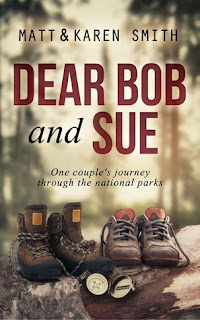 Dear Bob and Sue
by Matt Smith and Karen Smith
ebook, 314 pages
publisher "unknown" (Is that code for self-published?)

Goodreads summary:
This complete version of Dear Bob and Sue  chronicles the journey of Matt and Karen Smith, who took a mid-career break to travel to all 58 U.S. National Parks. Written as a series of emails to friends, Bob and Sue, they describe their sense of awe in exploring our national parks, and share humorous and quirky observations. The national parks are among the most stunning places in America - pristine wilderness, geologic wonders, and magnificent wildlife - places everyone should put on their must-see-before-I-die list. Matt and Karen take you along as they visit them all. Unlike a traditional guidebook, this is one couple's perspective on the joys and challenges of traveling together. This is a story of discovery and adventure: chased by a grizzly, pushed off the trail by big horn sheep, they even survived a mid-air plane collision. Dear Bob and Sue  is the next best thing to visiting all the parks in person

This is a great idea for a book, but it was not the book I'd hoped for.

Matt and Karen Smith, after becoming empty-nesters, decided to take a two-year break from their careers and visit all of the National Parks. The adventure is chronicled through a series of emails, written alternately by Matt or Karen, to their friends, Bob and Sue. Choosing to document the experience though emails allowed them to adopt a more informal, personal voice and share even the most off-beat anecdotes. I laughed through the first several letters, then quickly began to tire of the tone.

Surely their comments were intended to be funny and irreverent, though it often seemed they were taking cheap shots at one another, fellow travelers, and even park rangers. And although I like beer, especially after a long hike, is it really necessary to read about every one consumed over the two years? I think not. Ditto for the peanut butter and jelly sandwiches.

I began to enjoy the book more after limiting my reading to two or three letters per sitting. It's definitely better in small doses.

After recently visiting four National Parks, it was fun to compare our experiences with Matt and Karen's - hikes, weather, restaurants, lodging, etc. We ended up choosing  a couple of the same hikes and one restaurant... Zax in Moab, UT.

Though not meant to be a guidebook, I would certainly take another look at Matt and Karen's adventures in a specific park as we plan a visit. It's too bad they didn't include an index...