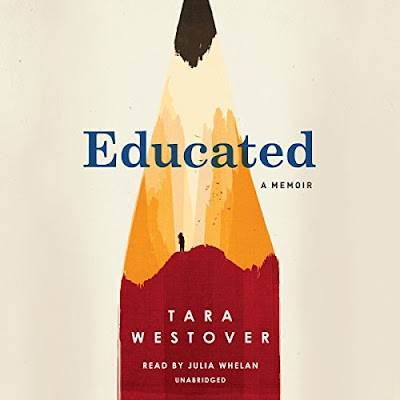 Motivation for reading: A combination of factors... primarily my curiosity about attending college without prior formal education and what childhood in a survivalist Mormon family might be like. Educated  was also an early selection of the PBS Now Read This book club.

Publisher's summary:
Tara Westover grew up preparing for the End of Days, watching for the sun to darken, for the moon to drip as if with blood. She spent her summers bottling peaches and her winters rotating emergency supplies, hoping that when the World of Men failed, her family would continue on, unaffected.

She hadn’t been registered for a birth certificate. She had no school records because she’d never set foot in a classroom, and no medical records because her father didn’t believe in doctors or hospitals. According to the state and federal government, she didn’t exist.

As she grew older, her father became more radical, and her brother, more violent. At sixteen Tara decided to educate herself. Her struggle for knowledge would take her far from her Idaho mountains, over oceans and across continents, to Harvard and to Cambridge. Only then would she wonder if she’d travelled too far. If there was still a way home.

Educated  is an account of the struggle for self-invention. It is a tale of fierce family loyalty, and of the grief that comes with the severing of the closest of ties. With the acute insight that distinguishes all great writers, Westover has, from her singular experience, crafted a universal coming-of-age story, one that gets to the heart of what an education is and what it offers – the perspective to see one’s life through new eyes, and the will to change it.

My strongest memory is not a memory. It's something I imagined, then came to remember as if it had happened. The memory was formed was I was five, just before I turned six, from a story my father told in such detail that I and my brothers and sister had each conjured our own cinematic version, with gunfire and shouts. Mine had crickets. That's the sound that I hear as my family huddles in the kitchen, lights off, hiding from the Feds who've surrounded the house. A woman reaches for a glass of water and her silhouette is lighted by the moon. A shot echoes like the lash of a whip and she falls. In my memory it's always Mother who falls, and she has a baby in her arms.

This is quite a memoir!  Westover has a fascinating story to tell and she does it well - BUT it was also a harrowing reading and listening experience.

Ms. Westover's upbringing was shocking, to say the least. Her parents infuriated me with their abuse, medical neglect, and complete abdication of educational responsibility. Her brother was also extremely abusive. At times this book was painful to read and listen to.

Westover is able to look back on her experiences with impressive thoughtfulness and insight but, to me, her main focus is on family dynamics and abuse. The educational angle, to my disappointment, was secondary... and the title somewhat misleading.

While I recognize that this book is very well written, I will not be recommending it to anyone.