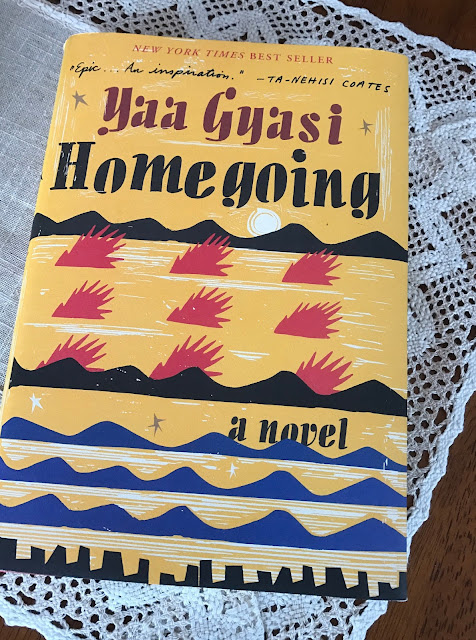 My literary year began on a high note when I selected Homegoing as my First Book of 2017. The novel appeared on year-end 'best of' lists from the New York Times to trusted blogging friends and was the 2016 release I most regret not reading before the year ended.

Set in 18th-century Africa, the novel opens with the story of two half-sisters separated by circumstances beyond control. One is sold into slavery, while the other is married off to a British slave dealer. As Homegoing unfolds, the chapters move forward generation by generation to the present day, with each focusing on one descendant. A family tree at the beginning proved extremely helpful!

As you would expect, the contrast between the two branches of the family is dramatic.

Homegoing is a very moving novel... Gyasi made me FEEL. I was fully invested in nearly all of her characters - quite a feat considering the sheer number of them. In fact, most are deserving of their own novel.

My sole complaint is that when each chapter ended and the narrative moved on to the next generation, I was left wanting more.

Yaa Gyasi is a debut author to watch. She will be awarded the John Leonard Prize, recognizing an outstanding first book in any genre, at the National Book Critics Circle Awards in March. I can't wait to see what she writes next.