A Readalong: The Unwinding, Part 1 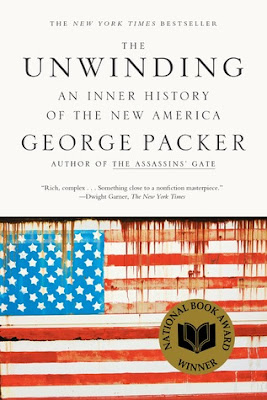 The Unwinding: An Inner History of the New America
by George Packer


Shortly after Election Day, The New York Times published an article entitled "6 Books to Help Understand Trump’s Win".  I'd recently read one of the books (Hillbilly Elegy) and added another (White Trash) to my wish list when I discovered Rachel's year-long readalong of all six. While I can't commit to them all, I am on board for the first.

What's The Unwinding about?
I'll borrow from the goodreads summary... it's long, but explains it better than I can.


American democracy is beset by a sense of crisis. Seismic shifts during a single generation have created a country of winners and losers, allowing unprecedented freedom while rending the social contract, driving the political system to the verge of breakdown, and setting citizens adrift to find new paths forward. In The Unwinding, George Packer... tells the story of the United States over the past three decades in an utterly original way, with his characteristically sharp eye for detail and gift for weaving together complex narratives.

The Unwinding journeys through the lives of several Americans, including Dean Price, the son of tobacco farmers, who becomes an evangelist for a new economy in the rural South; Tammy Thomas, a factory worker in the Rust Belt trying to survive the collapse of her city; Jeff Connaughton, a Washington insider oscillating between political idealism and the lure of organized money; and Peter Thiel, a Silicon Valley billionaire who questions the Internet's significance and arrives at a radical vision of the future. Packer interweaves these intimate stories with biographical sketches of the era's leading public figures, from Newt Gingrich to Jay-Z, and collages made from newspaper headlines, advertising slogans, and song lyrics that capture the flow of events and their undercurrents.

The Unwinding portrays a superpower in danger of coming apart at the seams, its elites no longer elite, its institutions no longer working, its ordinary people left to improvise their own schemes for success and salvation. Packer's novelistic and kaleidoscopic history of the new America is his most ambitious work to date.

I enjoy listening to nonfiction and borrowed this audiobook from my library via Overdrive. It begins with a short prologue (read by the author, the rest of the book is narrated by Robert Fass) which lays out his basic claim that the way of life we have known in America is "unwinding" before our eyes. Packer captured my attention with these few pages and I decided to purchase the ebook for a read/listen combination.

As Part I begins we are introduced to several Americans, both private citizens and public figures. The section continues as a series of alternating biographies. Each one is interesting individually and, taken together, represent a broad cross-section of American life.

This type of structure - the examining an event or time period through experiences of specific individuals -  has been successful for me in the past. The example that comes to mind is the 1985 book Common Ground: A Turbulent Decade in the Lives of Three American Families by J. Anthony Lukas, a Pulitzer Prize winner which tells story of the busing crisis in Boston. (I credit that book with my adult rediscovery of nonfiction... it's excellent.)

The life stories Packer chooses to highlight illustrate geographic, economic, and racial diversity. He seems to be painting an overall picture of economic, social, and political instability.

Bottom line:
I'm not quite sure how this book might increase my understanding of Trump's victory, or even how these personal stories connect to prove the author's thesis, but it certainly makes for interesting reading.

I'm curious to see what Parts II and III hold. 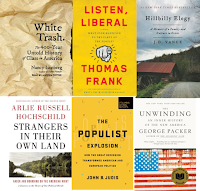