Tuesday Intro: Be Frank With Me 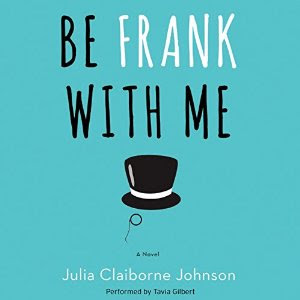 Because the station wagon blew up in the fire, Frank and I took the bus to the hospital. When I told him we'd get there in less than half the time in a taxi, Frank said, "I only ride in taxis with my mother. You are not my mother, Alice."

This was a fact. Once the kid latched on to a fact there was no point in trying to talk him around to practicalities. "Fine," I said. "We'll take the bus."

Be Frank With Me
by Julia Claiborne Johnson

After finishing a read/listen combination of Missoula  over the weekend, I was emotionally drained and needed my next audiobook to be something totally different - fiction, definitely, maybe a little lighter, and a really great narration was a must. Be Frank With Me, recently recommended over at Beth Fish Reads, seemed to be exactly what I was looking for.


Reclusive literary legend M. M. “Mimi” Banning has been holed up in her Bel Air mansion for years, but now she’s writing her first book in decades and to ensure timely completion her publisher sends an assistant to monitor her progress. Mimi reluctantly complies—with a few stipulations: No Ivy Leaguers or English majors. Must drive, cook, tidy. Computer whiz. Good with kids. Quiet, discreet, sane.

When Alice Whitley arrives at the Banning mansion, she’s put to work right away—as a full-time companion to Frank, the writer’s eccentric nine-year-old, a boy with the wit of Noël Coward, the wardrobe of a 1930s movie star, and very little in common with his fellow fourth graders.

As she gets to know Frank, Alice becomes consumed with finding out who his father is, how his gorgeous “piano teacher and itinerant male role model” Xander fits into the Banning family equation—and whether Mimi will ever finish that book.

Full of heart and countless only-in-Hollywood moments, Be Frank With Me is a captivating and heartwarming story of an unusual mother and son, and the intrepid young woman who finds herself irresistibly pulled into their unforgettable world.

I began listening and was instantly hooked on the narration. Even though I've barely listened to more than a single chapter, the story has grabbed my attention, too. I think I'm going to love this audiobook. You can listen to an audio sample here.

What do you think? Would you keep reading...or listening?