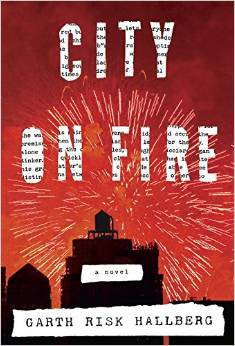 New York City, 1976. Meet Regan and William Hamilton-Sweeney, estranged heirs to one of the city's great fortunes; Keith and Mercer, the men who, for better or worse, love them; Charlie and Samantha, two suburban teenagers seduced by downtown's punk scene; an obsessive magazine reporter, Richard, and his idealistic neighbor, Jenny, - and the detective trying to figure out what any of them have to do with a shooting in Central Park on New Year's Eve.

The mystery, as it reverberates through families, friendships, and the corridors of power, will open up even the loneliest-seeming corners of the crowded city. And when the blackout of July 13, 1977, plunges this world into darkness, each of these lives with be changed forever.

City on Fire  is an unforgettable novel about love and betrayal and forgiveness, about art and truth and rock 'n' roll, about what people need from each other in order to live... and about what makes the living worth doing in the first place.

You might remember City on Fire for the astronomical advance its author received last year... the nearly two million dollars raised even more eyebrows going to a debut novelist. Or you might remember the wonder that Knopf would publish a 950 page novel in this day and age. Those factors, combined with a 1970s NYC setting, made the novel seem irresistible. Could it really be worth that advance?  I had to read it myself and find out.

And I did. It took nearly a month to get through all 944 pages. I opted for the ebook version since I doubted my ability to support such a massive tome for extended periods of time, and soon added audio to the mix as well. (The production is excellent.)

I found myself completely immersed in the New York City of the late 1970s... and most of that experience was truly remarkable. City of Fire  offers an intricate, complex story, with a wide array of well-developed characters. There is history, a mystery, philosophy, psychology, and it all culminates with the great blackout of 1977. I've even seen this novel compared to Bleak House.

In addition, the writing is excellent... at times, even brilliant. And Hallberg makes it seem so effortless. I marveled at his vocabulary. Where did he ever come across some of those words? I've never appreciated the ebook dictionary function so much.

The physical book is creative and attractive, too. A variety of fonts and formats, especially in the interlude sections, makes for a visually appealing product.

I was enthralled for most of the journey and remember thinking this was easily a 4-star book.

The 'resolution' began. It continued for 300 pages, maybe more, and... NOTHING. What? Did the author simply get tired of writing? Was 944 pages all he had in him? After investing so much reading time, I felt entitled to an ending. This was completely unsatisfying. To be clear, I have no problem with open-ended or ambiguous endings, but this just seemed lazy. I felt cheated.

And the length? I don't think this story really warrants 944 pages. A good editing would have cut three hundred pages, probably more. Reading about the 70s punk scene got pretty boring after a while... though to be honest, it didn't interest me much back then either.

Despite all the positives (writing, plot, characters), the lack of an ending after reading almost one thousand pages was too much of a disappointment for me to overcome.

I'm very curious about this novel's sales figures. Was Knopf able to recoup their 2 million dollar advance? Would they cut the length if given an opportunity for a redo? Or ask the author to write an ending?

With all of that said, I eagerly await Hallberg's second novel. And I will read it... provided it comes in under five hundred pages.

Bottom line:
Given the length and lack of an ending, I cannot recommend City on Fire.
Throw it on the pile of overhyped debut novels.