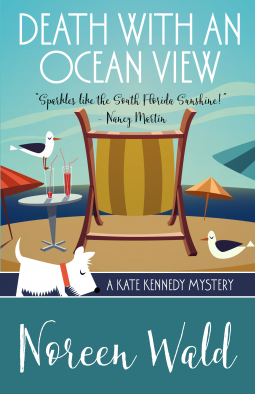 "Charlie, what the hell am I doing in paradise?" Kate glanced up at a cotton ball cloud bouncing along in a cornflower blue sky, not expecting an answer. Charlie Kennedy, her husband, had dropped dead six months ago, still clutching the pen he'd used to close on their beachfront condo.

Ballou tugged on his leash. Knowing the Westie missed Charlie, too, she picked up speed, splashing surf over her bare feet and sending sand flying.

Another perfect day in South Florida. A cliche Kate considered pure propaganda, perpetuated by snow birds and retirees who'd left behind change of seasons, grandchildren, and decent public transportation, and now felt obliged to rave about the weather on a daily basis.

Death With an Ocean View
A Kate Kennedy Mystery, #1
by Noreen Wald

Although not clearly noted on the NetGalley page, this book appears to be an upcoming (March 8) reissue of the 2004 book by Nora Charles, another pen name used by the author. After my long haul with City on Fire and my current Henry James reading, this cozy mystery is a welcome change of pace... especially in the evenings when my brain is too tired for Henry's prose. The south Florida setting and pretty cover are very appealing, too.


Nestled between fast track Ft. Lauderdale and nouveau riche Boca Raton, the once sleepy beach town of Palmetto is plagued by progress. The latest news has Ocean Vista condo board president Stella Sajak and other residents in an uproar. Developers plan to raze the property and put up a glitzy resort. But when Stella says she’ll go to City Hall and fight this to the death, no one thinks to take her statement literally.

And when Kate begins to investigate the murder, she discovers that this little corner of the sunshine state is cursed with corruption, unsavory characters, and a very dark cloud overhead.