A Read-along Begins: What Maisie Knew 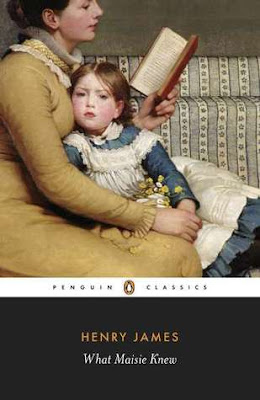 The child was provided for, but the new arrangement was inevitably confounding to a young intelligence intensely aware that something had happened which must matter a good deal and looking anxiously out for the effects of so great a cause. It was to be the fate of this patient little girl to see much more than she at first understood, but also even at first to understand much more than any little girl, however patient, had perhaps ever understood before. Only a drummer-boy in a ballad or a story could have been so in the thick of the fight. She was taken into the confidence of passions on which she fixed just the stare she might have had for images bounding across the wall in the slide of a magic-lantern. Her little world was phantasmagoric - strange shadows dancing on a sheet. It was as if the whole performance had been given for her - a mite of a half-scared infant in a great dim theatre. She was in short introduced to life with a liberality in which the selfishness of others found its account, and there was nothing to avert the sacrifice but the modesty of her youth.

What Maisie Knew
by Henry Hames

Oh, Henry! It's been a couple of years since I last read a Henry James novel (Washington Square in 2013), but the style and rhythm of his sentences is immediately recognizable. It will no doubt take me several pages, or maybe even a chapter, to get into the groove, but I'm looking forward to beginning this novel within the next couple of days.

I'll be reading along with Audrey, Frances, and a couple of others. We'll post our thought at the end of the month... you're welcome to join us.


After her parents’ bitter divorce, young Maisie Farange finds herself shuttled between her selfish mother and vain father, who value her only as a means for provoking each other. Maisie—solitary, observant, and wise beyond her years—is drawn into an increasingly entangled adult world of intrigue and sexual betrayal until she is finally compelled to choose her own future. Published in 1897 as Henry James was experimenting with narrative technique and fascinated by the idea of the child’s-eye view, What Maisie Knew is a subtle yet devastating portrayal of an innocent adrift in a corrupt society.