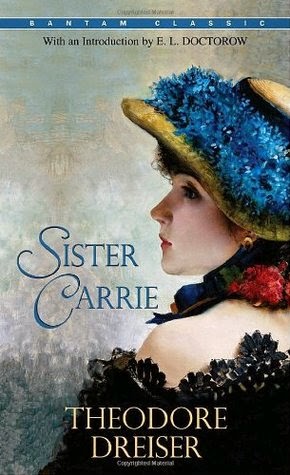 THE MAGNET ATTRACTING: A WAIF AMID FORCES

When Caroline Meeber boarded the afternoon train for Chicago, her total outfit consisted of a small trunk, a cheap imitation alligator-skin satchel, a small lunch in a paper box, and a yellow leather snap purse, containing her ticket, a scrap of paper with her sister's address in Van Buren Street, and four dollars in money. It was in August, 1889. She was eighteen years of age, bright, timid, and full of the illusions of ignorance and youth. Whatever touch of regret at parting characterised her thoughts, it was certainly not for advantages now being given up. A gush of tears at her mother's farewell kiss, a touch in her throat when the cars clacked by the flour mill where her father worked by the day, a pathetic sigh as the familiar green environs of the village passed in review, and the threads which bound her so lightly to girlhood and home were irretrievably broken.

Over the weekend, Care mentioned the possibility of a low-key, no pressure Sister Carrie  readalong and I immediately agreed. Dreiser's An American Tragedy  was a favorite last year and I already had plans to read Sister Carrie  sometime in 2015. Besides, if I've learned anything from The Classics Club, it's that classics are always better with friends. My plan is to make this a read/listen combination. The details (loose and non-threatening) can be found on Care's blog. Would you like to join us for the #CarrieAlong?


With Sister Carrie, first published in 1900, Theodore Dreiser transformed the conventional “fallen woman” story into a genuinely innovative and powerful work of fiction. As he hurled his impressionable midwestern heroine into the throbbing, amoral world of the big city, he revealed, with brilliant insight, the deep and driving forces of American culture: the restless idealism, glamorous materialism, and basic spiritual innocence.

Every Tuesday, Diane at Bibliophile by the Sea posts the opening paragraph (sometime two) of a book she decided to read based on the opening. Feel free to grab the banner and play along.
Posted by JoAnn at 7:25 AM

Email ThisBlogThis!Share to TwitterShare to FacebookShare to Pinterest
Labels: classics, Quote of the Week, read-alongs