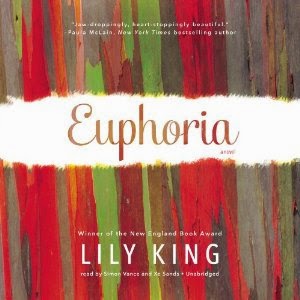 As they were leaving the Mumbanyo, someone threw something at them. It bobbed a few yards from the stern of the canoe. A pale brown thing.
'Another dead baby,' Fen said.
He had broken her glasses by then, so she didn't know if he was joking.


The opening lines of Euphoria by Lily King, among the oddest I've encountered, left me feeling slightly off-balance. Unfortunately, I was never able regain my equilibrium or fully connect with the novel.

Inspired by events in the life of anthropologist Margaret Mead, Euphoria tells the story of "three young, gifted anthropologists in the 1930s caught in a passionate love triangle that threatens their bonds, their careers, and, ultimately, their lives."

I listened to the book in December after it was offered as an audible daily deal. In addition to the price, there were three additional draws:
-  it had appeared on several year-end "Best of" lists
-  I have a vague interest in both anthropology and Margaret Mead
-  narrators Simon Vance and Xe Sands are among my favorites

While I found lots of interesting anthropological tidbits, the novel itself just didn't have much of an impact on me.

The high point was definitely the narration. Euphoria perfectly lends itself to a dual narrator production and the combination of Simon Vance with Xe Sands was inspired. Vance, narrating the larger portion as Englishman Andrew Bankson, easily slips in and out of an Aussie accent. Sands narration adds depth and understanding to the character of Nell Stone.

Not a favorite by any means, but I'm glad I listened.